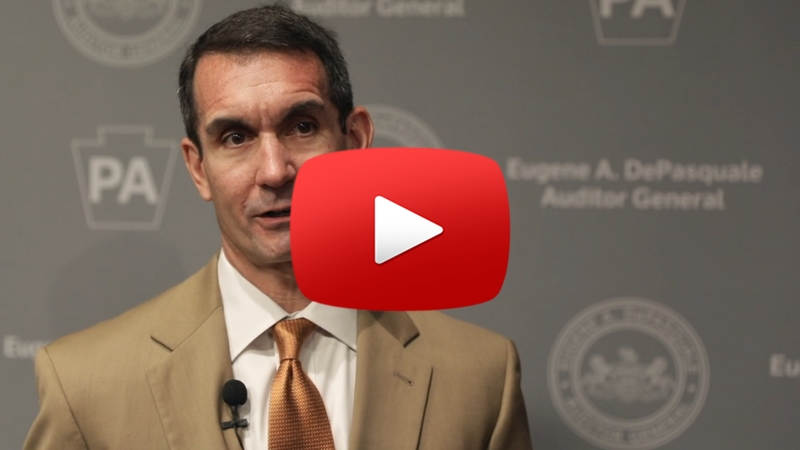 HARRISBURG (July 25, 2019) – Auditor General Eugene DePasquale today called for records to be expunged in nearly 1,000 cases where people were wrongly charged with a crime in Erie County.

“This miscarriage of justice must be quickly corrected and I will work with the appropriate authorities to get it resolved,” DePasquale said.

DePasquale’s audit of the Erie County District Court 06-2-04 found 880 cases from 2014 to 2017 where a former magisterial district judge improperly filed criminal charges for theft of services that should have been classified as civil complaints. As a result, these individuals may unknowingly have a criminal record that could show up in background checks for employment and volunteer service.

“Someone who owed $7 on a school lunch account now has a criminal record. Other cases involved overdue library books, fees to the YMCA, loans from credit unions and payments for services, like plumbing and repairs,” he said. “While it is indeed important for people to pay what they owe, judges have a fundamental responsibility to handle civil cases as the law requires.”

The filing of a criminal charge avoided nearly $100 in court filing costs which would have to be paid upfront in a civil action. This led to the state losing an estimated $32,737.70 in fines and court costs, but DePasquale said he’s less concerned about that loss than he is the lasting impact on those individuals whose cases were mishandled.

The problem was revealed last fall when a person complained that a potential employer found a criminal record during a background check. When the individual protested, they learned that the former district judge improperly handled the civil complaint.

“Imagine the absolute shock of being asked to explain why you have a criminal record that you didn’t even know existed,” DePasquale said. “This situation could wrongly disqualify someone from getting a job or being able to serve as a volunteer.”

Upon learning of the situation, the newly elected district justice notified the Erie County court administration and the Administrative Office of Pennsylvania Courts, which oversees the state’s district court system. She also informed the Pennsylvania Department of the Auditor General.

Auditors found that when someone sought to file a civil complaint, the former district judge would issue a criminal complaint form instead. The actual number of mishandled cases may be even higher than the 880 found by auditors because the practice may have started as early as 2001.

An individual would have to go through a costly process to have the criminal record expunged, but DePasquale said all fees and costs required to correct the records in these cases should be waived.

Review the audit report for Erie County District Court 06-2-04 and learn more about the Department of the Auditor General online at www.PaAuditor.gov.