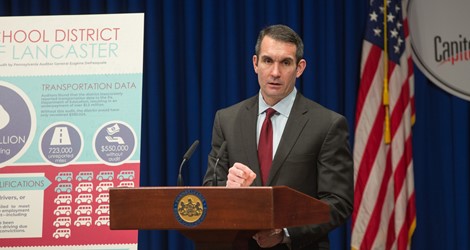 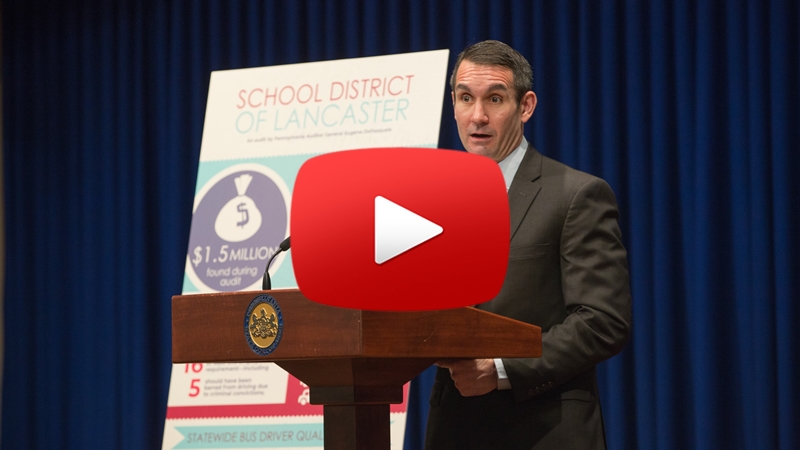 HARRISBURG (Jan. 30, 2018) – Auditor General Eugene DePasquale today warned school officials statewide to be extra vigilant with bus driver background checks after auditors discovered 10 drivers in various school districts who should have been banned from transporting students because of criminal convictions.

In addition to 10 criminal convictions, auditors found that since 2013, 58 school districts in 28 counties were missing driver documentation or had drivers with one or more missing certifications or criminal background checks.

“Protecting the safety of students must be a top priority for every single school in the state,” DePasquale said. “It is outrageous that my team found bus drivers with criminal records that – by law – should have precluded them from driving students.

“The only way to prevent the wrong people from transporting students is for school districts to make sure all drivers are properly vetted to ensure they qualify to transport and interact with students,” DePasquale said, noting many schools that use bus contractors are under the false impression that the contractor is responsible for these checks under the Public School Code and for ensuring that operators have the proper driving credentials under the Vehicle Code.

“Let me be very clear:  it is the responsibility of the schools to make sure all drivers have the appropriate qualifications and background clearances to interact with students. School officials are also charged with maintaining the driver documentation in school files,” he said.

“School district administrators: these are your students; you are responsible for their safety.”

In the case of the School District of Lancaster, which uses a contractor to transport students, auditors found 21 of 132 bus drivers — 16 percent — driving for the district as of June 15, 2017, failed to meet at least one employment requirement.

Five of those 21 bus drivers were ineligible for employment when hired based upon criminal convictions:

A sixth driver in the School District of Lancaster had a criminal conviction from another state that, from the limited information listed on the documentation, appears to require an absolute ban from contact with students. Subsequently, the district obtained additional information and determined that the individual is eligible to drive, so the driver has not been relieved of bus driving duties.

“These individuals had convictions for simple assault, delivery of controlled substances, and possession of firearms without a license, and yet they were driving students,” he said. “That is absolutely ludicrous.”

In addition to the School District of Lancaster, auditors found statewide that since 2013, another three school districts used bus drivers who were barred from driving students because of criminal histories:

In those districts where auditors identified drivers that were ineligible because of criminal convictions those districts immediately removed them from transporting students.

“I am pleased to report that in most – but not in all cases – where we conducted a subsequent audit, the school districts with bus driver deficiencies have moved to correct problems we identified,” DePasquale said. “That said, I will follow up in future audits to ensure that nothing has fallen through the cracks.

“Problems with bus driver background checks and certifications are found across the board: in urban, suburban and rural school districts,” he said. “It is imperative that school officials use due diligence in vetting and monitoring all bus drivers to ensure the safety of students.”

The School District of Lancaster audit report is available online at: www.PaAauditor.gov.

Local Education Agencies (school districts, charter schools, intermediate units, and area vocational-technical schools) are required by the Public School Code to have the following documentation on all bus drivers:

The following list shows which audits found deficiencies in bus driver records. Note that many of them corrected the deficiencies immediately and auditors verified the corrective action in subsequent audits as noted with asterisks. The lack of an asterisk indicates that a subsequent audit has not yet been conducted to verify corrective action was taken.