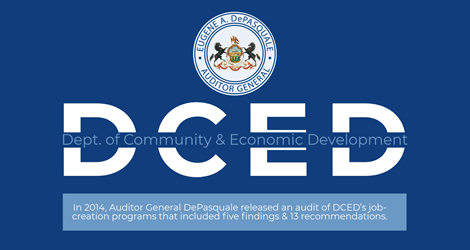 HARRISBURG (Dec. 18, 2018) – Auditor General Eugene DePasquale today said that the Department of Community and Economic Development (DCED) has made progress in accounting for the millions of taxpayer dollars spent on job-creation programs.

Last summer, DePasquale promised to revisit his 2014 performance audit of DCED, which made 13 specific recommendations to provide a greater level of accountability, transparency and oversight in the state’s job-creation incentive programs.

“Pennsylvania taxpayers want to know if they’re getting a good return on the state’s investments in creating jobs,” DePasquale said. “To me, that’s the bottom line: if you receive taxpayer funds, you’d better do what you’ve promised to do.”

In a follow-up to the 2014 audit, DePasquale asked DCED for a status report on implementing the recommendations. Most have been adopted, including holding businesses accountable for creating and/or retaining the number of jobs pledged.

“Businesses that do not hold up their end of the bargain will be held accountable for not meeting the conditions of receiving job-creation aid,” DePasquale said. “I’m pleased that the department took our findings to heart and implemented most of my recommendations.”

At DePasquale’s request, DCED provided two examples of companies that were penalized and forced to repay the money they received:

DePasquale is nearing completion of a performance audit of the state’s workforce development system to determine the effectiveness of programs in five state agencies to prepare workers for jobs businesses need to fill.

Visit the Department of the Auditor General online at www.paauditor.gov.

Editor’s Note: DCED’s response to each numbered findings in the 2014 audit is included below.

RESPONSE: For its job creation programs, DCED has always had an established goal of creating 100 percent or more of the jobs that were pledged to be created.  The department has not found any other similarly-populated states that have published the goals of their job creation programs publicly. After careful analysis, DCED concluded that establishing additional annual goals and performance measures would not result in reliable indicators of program success. The Pennsylvania First and PIDA programs are designed to be flexible programs that can respond to the needs of businesses in rapidly-changing economic conditions. Therefore, program objectives often change on a month-to-month basis. Unpredictable economic conditions, like changes in interest rates, tariffs, recessions, etc., could quickly change the demand for a low-interest loan program like PIDA and thus would impact a yearlong job creation goal.  The PIDA program is flexible and readily available to most industries throughout the commonwealth to meet their constantly changing needs.  For instance, as Pennsylvania’s dairy industry struggled in the spring and summer months of this year, the PIDA program was able to respond accordingly, placing a stronger emphasis on agriculture projects in comparison to job creation projects. Setting additional goals – for example, to create a certain number of jobs per year – would limit the flexibility of the programs and would not account for the fluctuating market, and further would not have allowed the department to be supportive of Pennsylvania’s farmers.

The Pennsylvania First program does collect aggregate job creation data in the annual budget and makes job creation predictions based on historical performance of the program. This figure is used primarily to make an accurate appropriation request.

RESPONSE: DCED collects and reviews reports from the Performance and Monitoring Division at the end of each fiscal year. These reports show the jobs pledged compared to the jobs that were actually created at the conclusion of the monitoring period. As mentioned in the first response, DCED’s primary goal with these programs is to have 100 percent or more of the jobs that were pledged to be created by the conclusion of the monitoring period. DCED measures program success based on its ability to achieve that goal as well as provide assistance to industries throughout the commonwealth, especially in regions demonstrating the greatest need.

RESPONSE: Holding businesses accountable for their job creation pledges has been a priority for DCED for many years, and we continue to penalize companies that have not upheld their end of the bargain. DCED has been penalizing companies since job creation programs began in 1996 with first monitoring results in 1999.  Additionally, at the direction of Governor Wolf, DCED has improved and tightened the enforcement of clawback provisions, including:

Governor Wolf and DCED will continue to hold businesses accountable for their job creation and investment pledges when they receive state funding from job creation programs like Pennsylvania First and PIDA.

RESPONSE: All loans are monitored. For PIDA loans paid in full early, DCED requires that businesses report their job performance figures at the time of repayment. This gives us an accurate report of the job creation that occurred at the business during the life of the PIDA loan.

The intent of the PIDA program is to aid Pennsylvania businesses in expanding within the commonwealth, while creating more family-sustaining jobs.  The program is a revolving loan fund, and PIDA receives no appropriations.  PIDA is able to provide loans based on the repayment of taxpayer dollars from previous loans plus interest.  When a company repays their loan, those funds are loaned to another company that will create more jobs in the commonwealth.

RESPONSE: DCED staff did discuss this matter with the PIDA board and decided not to impose a financial penalty on businesses that repay a loan in full early if their job creation requirements are not met. However, if a loan is paid off prior to the final monitoring date but does not meet the projected number of jobs created, that company can be denied a future loan by the PIDA board. Imposing a financial penalty would hurt PIDA’s competitiveness with private loan programs and reduce the attractiveness of the program to businesses looking to use the program to grow and create jobs.

RESPONSE: DCED revised its Annual Financing Strategy report in FY 15-16 to more clearly outline all the information prescribed by law. Additionally, in coordination with Governor Wolf’s Office of Performance through Excellence, DCED has further streamlined the Annual Financing Strategy report by shifting the entire report to an electronic format.  The report continues be to be reviewed for possible future improvements.  Also, in accordance with the governor’s stance on a more transparent government, DCED places its pledged job creation and retention information on the governor’s Open Data site.

RESPONSE: DCED made this change to its Annual Financing Strategy Report in FY 15-16. The original data in the report was dictated by legislation.

RESPONSE: The Local Share Account (LSA) program is not a job creation program. LSA funding is meant for community revitalization and development projects. That said, DCED staff has been evaluating the best ways to differentiate the Local Share Account job numbers from the verifiable job numbers of its job creation programs in the Annual Financing Strategy report. DCED, in concert with the governor’s Office of Performance through Excellence, has been planning, beginning in FY 19-20, to include only job creation programs in which creation and retention are a requirement, thus can be verified through monitoring.

RESPONSE: These procedures have been in place since the OGP, CJT, and IDP programs merged into Pennsylvania First in FY 11-12.  This is also a requirement under the PIDA program.

RESPONSE: Beginning in FY 15-16, DCED requires businesses to submit official documentation signed by an officer of the business under the penalty of perjury. Every tenth company is randomly selected by the monitoring database and a letter is generated asking for payroll records. The records must include a signature by the preparer, the date they were printed, the company name, and the name of each employee, and information about each employee such as start date, position, pay rate, and more.

RESPONSE: DCED receives and reviews Rapid Response and WARN notices from the Department of Labor and Industry on a weekly basis. If a company that was supported through DCED’s job creation program submits a WARN notice, DCED immediately contacts the company to begin the process of reclaiming any funds if appropriate.  Other data from the Department of Labor and Industry or the Department of Revenue is either protected under confidentiality or utilize different reporting standards. For example, final job monitoring occurs three years after date of disbursement. Labor and Industry data is collected quarterly. As these time frames differ, the data may not corroborate self-reported data submitted by the company during the final monitoring.