Criticizes Former Gov. Rendell for skipping board approval for payouts

Criticizes Former Gov. Rendell for skipping board approval for payouts 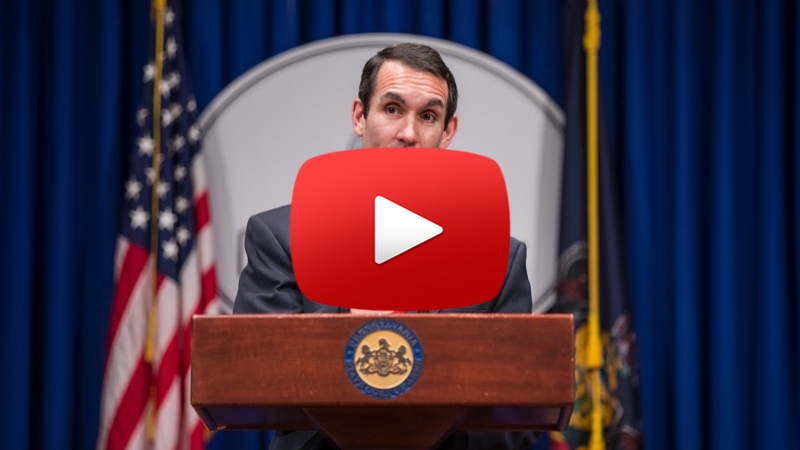 HARRISBURG (Nov. 20, 2017) – Auditor General Eugene DePasquale today said a review of the Democratic National Convention Philadelphia 2016 Host Committee’s financial records showed that a $10 million state grant was expended according to the grant agreement and that, because the grant agreement did not contain a specific claw-back provision, the committee is not required to pay back any of the money.

DePasquale also said former Gov. Ed Rendell, who oversaw the convention’s Bid and Host Committees, should have gotten approval from the Host Committee board before paying out more than $1 million to staffers and interns in November 2016.

“This review led us in two directions,” DePasquale said. “Our first priority, at the request of Gov. Wolf, along with Senators Scarnati, Corman and Browne, was to focus on the details of the $10 million Department of Community and Economic Development (DCED) grant and how the money was spent.”

DePasquale said among those he and his team interviewed to fully understand how the behind-the-scenes teams worked to pull off the 2016 DNC in Philadelphia were:

“Everyone we worked with was very cooperative,” DePasquale said. “I feel we had the opportunity to fully review everything we needed.”

Despite the grant agreement being 26 pages long, only one sentence — tacked onto the end of an appendix to the agreement — dictated how the Philadelphia 2016 Host Committee was to spend the $10 million it received from the state:

“The Host Committee will use the funds to pay for the infrastructure necessary for the City of Philadelphia to host the Convention including rental and build out of the Convention arena and other facilities, transportation, communications, technology systems, necessary office space and event security.”

“That’s it,” DePasquale said. “There’s 24 pages of boilerplate legal language, then a three-paragraph appendix that says at the end, ‘Oh, by the way, here are some vague ways you can spend taxpayer dollars.’”

Financial records show that the Host Committee deposited the $10 million — included as a line-item approved by the Senate and House as part of the 2015-16 budget — into a bank account kept separate from donor funds. The money was then spent on nine invoices over nine days for three purposes:

Each of those categories adheres to the requirements of the one sentence in the DCED grant agreement that describes how the money was to be spent.

“There is simply no claw-back provision in the agreement that says the commonwealth must be the payer of last resort,” DePasquale said. “There is no provision that says the state money must be used only after all privately raised funds have been expended.

“At the end of the day, DCED did a poor job writing a grant agreement that was specific enough to protect Pennsylvania’s taxpayers,” DePasquale continued. “And we found that was not the only contract that was deficient.”

In fact, no DCED contract in at least the last 10 years has contained any such provision, according to the results of a Right-to-Know Law request of the department.

“That’s ridiculous,” DePasquale said. “Nobody has ever thought to say, ‘Hey, use all the private money first, and then use the taxpayers’ money’? Nobody? Ever?”

In November 2016, Host Committee members realized they had about $2.1 million in excess privately raised funds. Rendell, who earned no direct salary from the committee, told DePasquale’s team in June 2017 that he decided to use the excess funds to pay “deferred compensation” he says he had promised to staff members and interns.

In total, $1.037 million was paid out in November 2016 to staffers and interns. The other roughly $1.1 million was donated in December 2016 to Philadelphia-area charities that had a direct impact on the convention.

“We can play Monday morning quarterback all we like,” DePasquale said, “but the fact is that Rendell authorized those payouts, and they were made.

“Rendell admitted to me and my team that he should have consulted the Host Committee’s board about such a decision. But he didn’t, and the damage is done.”

“One thing I can say with certainty is that no public funds were used for any of those November 2016 payouts,” DePasquale said.

“However, given the confusing nature of nonprofit laws and the fact that two members of the nonprofit Bid and Host committees received payouts raised enough issues with my team that we believe it is appropriate for the IRS to review.”

EDITOR’S NOTE: Attached is a timeline of the Philadelphia 2016 Bid and Host committee activities.

December — Bid Committee begins including $10M commitment from state in its cash flow estimates to DNCC.

May – News stories based on FEC filing break about “bonuses” being handed out.

May 17 – Bid Committee files articles of dissolution with state.

December – Anticipated closeout of Host Committee and its accounts.