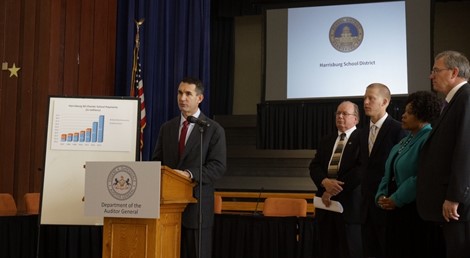 HARRISBURG (Oct. 20, 2015) — Auditor General Eugene DePasquale today said that despite having a healthy general fund balance, a recent audit shows that Harrisburg School District continues to face significant financial challenges including excessive debt, a decrease in the collection rate of property taxes, sizable losses from its cafeteria operations, and a dramatic increase in payments to charter schools.

“While the district made progress toward getting its fiscal house in order, the district still has many challenges and has a long way to go,” DePasquale said.

The cafeteria fund had an accumulated deficit of a half-million dollars in 2010. Expenditures exceeded revenues for four of the five school years from 2010 through 2014. In the 2013-14 school year, the district reduced the accumulated deficit with a nearly $1.3 million transfer from the general fund. However, even after this transfer, the cafeteria fund had a remaining deficit of $877,108, as of June 30, 2014.

“Our auditors heard stories that the cafeteria was in total chaos for a period of time,” DePasquale said. “At times there were not enough cafeteria workers to staff the cash registers and no one was documenting how many students were being fed. Even in districts where many students receive free or subsidized meals, there is a basic responsibility and necessity to track the number of meals to claim accurate reimbursement.”

The district subsequently contracted with a qualified vendor to handle cafeteria operations and reported that expenditures have stabilized.

“The unlicensed health care aides were responsible for dispensing medicine, giving flu shots, providing first aid and maintaining health care records,” DePasquale said. “Without the health care license and training that goes with it, unlicensed aides have a greater risk of making mistakes that could jeopardize the health of students, staff and the entire school community.

“As a parent, I find it disturbing — and simply outrageous — that the district permitted uncertified health care employees to treat students.” 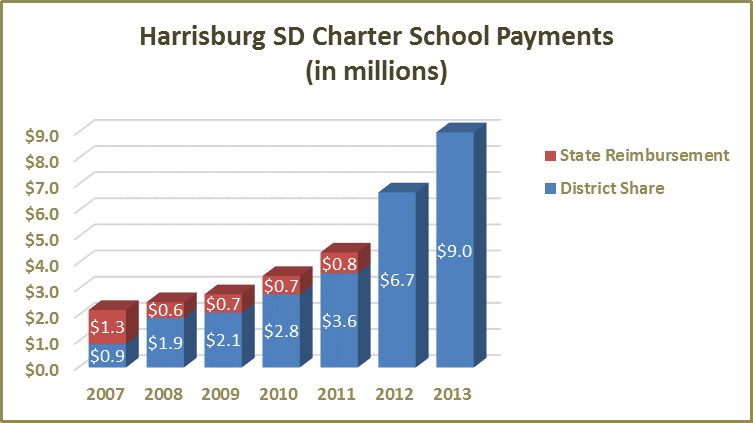 While the district subsequently replaced the employees with the required certified, licensed nurses, auditors note that the district faces potential forfeiture of state subsidies totaling $32,989 by the Department of Education for noncompliance with the Pennsylvania School Code.

“The good news is that the district’s general fund balance increased between 2007 and 2013, from $7.6 million to $29 million and its general fund ratio, which in an indicator of liquidity, increased from 1.15 to 1.81 for the same period,” DePasquale said. “That is pretty much where the good news ends.”

The district’s debt service grew from 10 percent of general fund expenditures in 2011-12 to 13.8 percent — nearly $14.5 million — for 2012-13 school year. The Pennsylvania Association of School Business Officials recommends this percentage be less than 10 percent.

The audit report also includes information on other financial benchmarks:

Auditors also noted that the district:

“Every school district should have fundamental recordkeeping procedures to ensure accurate data is maintained and submitted for reimbursement,” DePasquale said. “It is just as important to have data security and computer access controls to protect that data, which could include personal student information.”