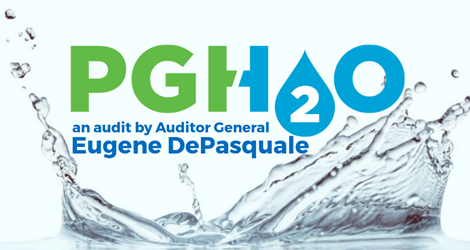 “Everyone — customers, PWSA, even city officials — knows and acknowledges PWSA has extreme financial, management, infrastructure and water quality problems,” DePasquale said. “PWSA customers are tired of hearing how broken everything is and want to start hearing about how the system is going to be fixed.

“The PWSA board needs to immediately gain control of the situation and start doing what’s right for residents,” he said.

Pittsburgh residents have been plagued by the dysfunctional operations of the PWSA, including a heavy debt load, deteriorating infrastructure, constant operational problems, lack of leadership and frequent senior-level turnover.

PWSA serves 82,000 customers in the city who are all too familiar with these issues. Auditors found that there have been more than 3,500 pipe breaks since January 2014 alone, which is about 2.5 breaks per day.  Additionally, PWSA is not able to bill about 50 percent of the clean water its system produces due, in part, to leaky pipes that cannot be located. The report also notes that water storage facilities and other equipment need to be replaced.

“These problems didn’t happen overnight,” DePasquale said.  “Years — decades even — of mismanagement and lack of leadership caused the current situation that, at times, has endangered the health of Pittsburgh’s families.”

When the PWSA was created in 1984, the water and sewer system was over 70 years old. PWSA could not provide any documentation about the condition of the system at that time the authority was created, but DePasquale noted that his auditors’ review found the city used PWSA proceeds for non-system purposes from 1984 through 1995.

In 1995, a new lease agreement was executed, which required the PWSA to issue revenue bonds in order to pay the city $101 million upfront for the opportunity to operate the system until 2025.

“This was a bad deal for residents who rely on PWSA for their water,” DePasquale said. “It also set the stage for the PWSA to continue to issue debt to deal with an old and deteriorating system. Add in PWSA’s admission that routine system maintenance was not performed for years, as well as the authority’s obvious inability to find competent leadership, and it’s no wonder the system is broken.”

PWSA attempted to fill the leadership void by contracting with Veolia Water North America Northeast (Veolia) to manage the system from July 2012 through December 2015. During that time, key operational positions were filled by Veolia, which managed the day-to-day operations with some oversight by the PWSA Board.

The initial contract with Veolia was for one year with an optional six-month extension. The contract was extended twice and Veolia was paid a total of $11,006,525. However, PWSA staff indicated that they anticipate other charges from Veolia for which it has not been invoiced. Collectively, invoiced and uninvoiced charges could total an additional $3 million.

“Part of Veolia’s compensation was based on the amount of cost savings realized by PWSA,” DePasquale said.  “So, it stands to reason that some decisions about repairs and upgrades may have been made to benefit Veolia’s profitability rather than to benefit PWSA and its customers.”

PWSA’s heavy debt load and poor financial position prevented adequate capital investments. PWSA’s bond and loan debt increased from $300 million in 1995, to $680 million in 2012 and to more than $750 million in 2016. PWSA’s working capital (current assets minus current liabilities) has decreased from a positive $7.7 million to a negative $15.7 million from 2012 to 2016.

On average, PWSA invested $31.4 million annually in capital improvements from 2012 to 2016.  However, based on its size and value, on average the PWSA should have been investing $200 million annually.

“My audit shows that PWSA invested just 15 percent of what it should have in annual system upgrades and repairs. This lack of capital improvement investment contributes to the deteriorating infrastructure that continues to fail routinely, forcing whole neighborhoods to boil their water,” DePasquale said.

“It should come as no surprise that fixing PWSA’s water and sewage system could take decades and cost billions,” DePasquale said. “Stabilizing deteriorating infrastructure and investing in necessary improvements is obvious and, based on PWSA’s track record, customers are understandably concerned. PWSA absolutely cannot continue down its current path.

“My recommendations provide a road map to help put the PWSA and its customers on the path to safe, reliable drinking water for generations of Pittsburgh families to come.”

“The number of poor business practices I found at PWSA is appalling, and many of them stem from the unfair and outdated 1995 co-op agreement between PWSA and the city,” DePasquale said. “This agreement is not only a financial burden to PWSA but is also a slap in the face to city residents. That agreement must be amended immediately.”

The 40-year co-op agreement was created to establish which services the city would provide to the PWSA and how the PWSA would pay the city for these services.

“The most troubling term of the co-op agreement is that PWSA provides the city with up to 600 million gallons of free water each year,” DePasquale said. “Residents have to pay a PWSA bill every month, but 400 city-owned properties including public pools, parks and ball fields, the Pittsburgh Zoo and Phipps Conservatory receive free water.”

“Right now, PWSA customers are paying for hundreds of millions of gallons of water used at city-owned properties,” DePasquale said. “Some of these are important city assets that help boost the economy, but the problem is, no one has a clue exactly how much water is being used.

“We are talking about millions of gallons and, especially when funding is tight, the city and PWSA need to find balance in who pays for the water to these properties,” DePasquale said.  “There are potentially millions of dollars at stake that could be used help offset rate increases for PWSA customers and be invested in improving the system.”

For starters, DePasquale recommends that PWSA:

The co-op agreement also requires PWSA to subsidize water service for city residents serviced by Pennsylvania American Water (PAW). This provision of the agreement basically means that PWSA is responsible for paying the difference between its rate (lower) and PAW’s rate (higher) for those city residents who are serviced by PAW.

“In just over three years, the subsidy provision of this flawed co-op agreement and waived sewage fees cost PWSA customers $19.2 million,” DePasquale said.  “Not only are PWSA customers subsidizing water use for city-owned properties, but they are also subsidizing the water usage of residents serviced by a different company.”

DePasquale recommends PWSA develop a strategy to reduce and ultimately close the subsidy gap between the Pennsylvania American Water company charges and the PWSA rates.

Another costly provision of the co-op agreement is the requirement for PWSA to pay the city for direct expenses plus overhead. During the audit period, the city billed PWSA $7.15 million annually. Auditors found that invoices covering the 2014, 2015 and 2016 calendar years did not contain detailed information as to what services were being billed.

“When my team asked why PWSA was paying for these city bills that had no detailed explanation, PWSA indicated that the practice was to just pay the bill,” DePasquale said.  “This is not just bad accounting or business practice, it’s just bad practice, period.”

DePasquale also noted that, while not related to the co-op agreement, PWSA is paying for fire hydrant service charges invoiced by the various water companies, which totaled more than $960,000 during the audit period. Moreover, PWSA does not charge the city to service the city’s 7,400 hydrants in PWSA’s service area, which could total $1.8 million annually.

Address structure of board

PWSA’s articles of incorporation require the city treasurer and director of finance to be permanent members of the PWSA board. Pittsburgh’s home rule charter requires the mayor to appoint, and the city council to approve, a city councilperson as well as four additional members to the PWSA Board.  Accordingly, all seven PWSA board members have direct or indirect ties to the city; and, currently, four PWSA board members are compensated by the city.

DePasquale recommends PWSA amend its articles of incorporation to require that PWSA Board seats be filled by individuals not compensated by the city.

“Either PWSA should be a separate independent authority and operate as such, or the city should operate the water and sewage system as part of the city’s functions,” DePasquale said. “Arguments can be made for either scenario, but there is no decent argument for keeping the dysfunctional current structure.”

DePasquale recommends PWSA hire and establish a qualified and experienced management team, including a permanent, full-time executive director committed to working through the tough problems and to leading and operating the PWSA in the best interest of its customers.

“Quality leadership is essential for PWSA to make the necessary changes to benefit the residents of the city,” DePasquale said. “Quality leadership will also help ensure that there is not a repeat of the costly problems that occurred under Veolia’s management.”

PWSA generally agreed with the audit finding and recommendations and has already begun to implement changes.

“I am encouraged that the current PWSA board and management created a five-year capital improvement plan to more heavily invest in the PWSA’s infrastructure. If the plan is fully implemented, PWSA would collectively invest more than four times what it had invested in the previous five years,” DePasquale said.

DePasquale said he appreciates the current PWSA board and management for their recent efforts to seek professional guidance to help the PWSA comply with industry best practices and for demonstrating a commitment to working with the city to develop a new cooperation agreement.

“These actions are a good start, but they are only a start,” DePasquale said. “PWSA has a lot of work to do in order to regain the confidence of its customers and to prevent a total system collapse. My recommendations can help PWSA accomplish this work.”

The PWSA audit report is available online at: www.PaAuditor.gov. 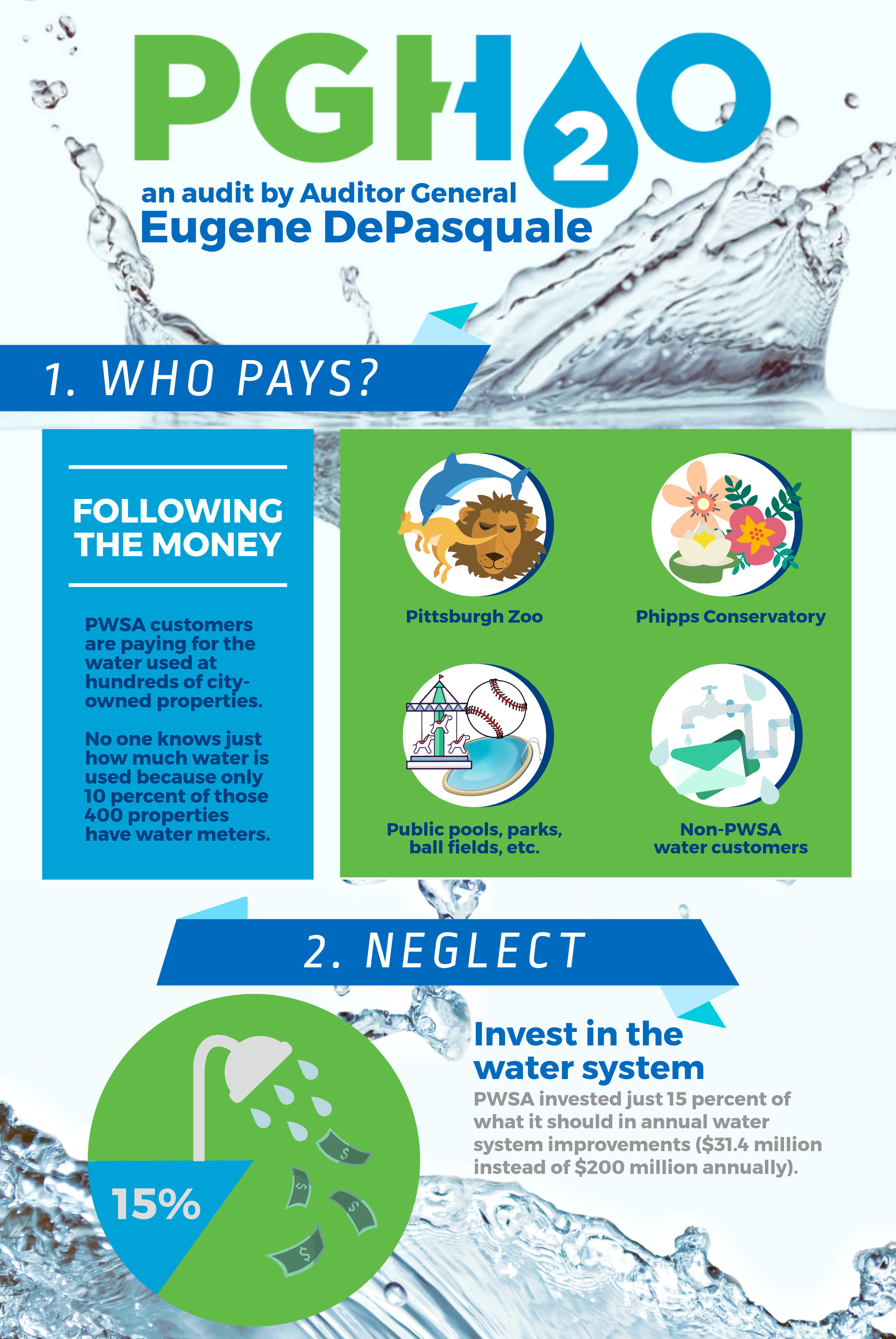