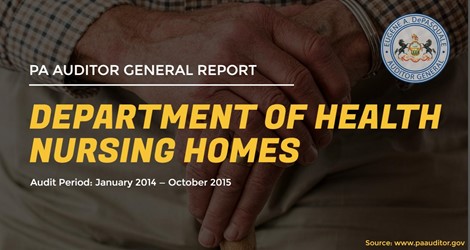 HARRISBURG (July 26, 2016) – Auditor General Eugene DePasquale said today that his audit of the Department of Health’s (DOH) oversight of nursing homes has already led to changes that should improve the quality of care residents receive.

“The quality of care provided to 80,000 Pennsylvanians who live in nursing homes is directly related to adequate staffing,” DePasquale said in announcing the 91-page audit, which has 13 findings — more than any special performance audit since he took office — and 23 recommendations.  “The Department of Health has work to do in making sure these facilities are appropriately staffed.

"Assuring adequate nursing staff are on duty at all times, investigating all complaints — including those submitted anonymously — in a timely manner and imposing monetary sanctions when necessary are three key functions of DOH’s oversight of nursing homes,”  DePasquale continued. “Implementing this audit’s recommendations will be crucial to improving the care that residents receive.”

DePasquale commended DOH for taking a proactive stance to improve its operations.

“This audit is an example of how the process should work,” DePasquale said. “DOH began hearing concerns about its oversight of nursing homes and asked us to conduct an audit.

In Pennsylvania, nursing home residents are required to receive a minimum of 2.7 hours of direct nursing care each day. This requirement — which was set in 1999 after the Department of the Auditor General first reviewed DOH’s oversight of nursing homes — refers specifically to skilled nursing care, not personal care.

Prior to the audit, DOH had no policies to ensure nursing homes met that requirement.

“Before we began our work, a perfect storm was on the horizon because of inadequate review and enforcement,” DePasquale said.

When auditors reviewed annual surveys from 42 nursing homes, they found that 71 percent of the DOH staffing reviews were incomplete:

• 10 percent lacked any documentation showing that a review of the facility’s staffing levels was conducted.

• In 37 percent of the surveys, DOH reviewed only one week of staffing information instead of the recommended three weeks.

• Of the 24 facility reviews that analyzed three weeks of staffing, only 50 percent also contained supporting documentation.

What is worse is that DOH used inconsistent methods, such as averaging direct nursing care time over a week rather than determining daily care time, so facilities were not all held to the same standard.

Then, DOH did little to enforce the 2.7 hour law. Auditors found that, out of the 7,235 instances in which DOH completed a nursing home survey, it issued just 13 citations — only 0.2 percent of the time.

“That is an unbelievably low number,” DePasquale said. “Clearly, prior to this audit, DOH was not getting to the root of the problem, which likely is that some facilities may lack sufficient nursing staff.

“It’s very simple: If nursing homes aren’t sufficiently staffed, the quality of life and quality of care for residents will suffer,” DePasquale said.

He noted that current regulations allow DOH to order increased facility staffing over the 2.7-hour standard, but DOH has never exercised that authority.

Auditors also noticed that DOH did not communicate with the Department of Labor and Industry, which takes complaints from health care workers when they are forced to work mandatory overtime.

“In 2015, we highlighted problems at the Department of Labor and Industry and how it enforced the health care worker overtime law,” DePasquale said. “We know from that audit that there were complaints coming from some nursing homes about mandated overtime.

“Because of this audit, DOH immediately began a dialogue with Labor and Industry to be better informed of potential mandated staffing violations at nursing homes,” DePasquale continued. “There’s no specific requirement for these two agencies to coordinate, but it makes sense for them to do so and it will lead to improved government efficiency and effectiveness.”

Responding to nursing home complaints should be one of DOH’s most important responsibilities. Yet, for three years — beginning in July 2012 under the Corbett administration — DOH did not accept anonymous complaints. This was a direct violation of the federal Centers for Medicare and Medicaid Services’ policy, which states that DOH must ensure the “privacy and anonymity” of every person making a complaint.

Since DOH began accepting anonymous complaints in July 2015, the number of complaints increased by 63 percent.

“I am pleased that the department is again accepting and investigating anonymous complaints, and I encourage DOH officials to continue to do so,” DePasquale said.

The audit also found that, because of staffing reductions at DOH, management more than doubled the length of time allowed to complete a complaint investigation from 14 calendar days to 21 business days.

“Now, instead of completing an investigation in two weeks, it could drag out for nearly a month,” DePasquale said. “The longer an investigation takes to complete, the longer a problem might go uncorrected — and the more likely it is that residents could be harmed.”

During the 22-month audit period, DOH cited 9,189 federal deficiencies in nursing homes and the federal government issued more than $2 million in fines to Pennsylvania nursing homes. By contrast, DOH issued only 47 state sanctions, 32 of which were fines totaling $172,350.

DOH officials said they prefer to mandate training when deficiencies are found rather than issue fines, especially when the facility is also facing federal sanctions. During the audit period, however, only 30 in-service trainings were ordered.

Auditors found that the decision-making when DOH decided to issue sanctions was well documented. However, auditors found problems when a sanction was not ordered but could have been.

“DOH has considerable administrative discretion when pursuing sanctions, and we agree that not every instance of noncompliance may warrant a fine,” DePasquale said. “However, when a facility is not sanctioned but could have been, there needs to be an explanation.”

DePasquale applauded DOH officials for their quick work to make improvements to the oversight of nursing homes.

“While our audit critically assesses the Department of Health’s performance in some areas, we do not question the dedication of DOH’s employees to their mission of protecting nursing home residents,” DePasquale said. “It is this dedication, along with our recommendations, that will further DOH’s mission and help improve quality measures within Pennsylvania nursing homes.”

EDITOR’S NOTE: To find information on nursing homes in your area, go to the Nursing Home Locator at http://sais.health.pa.gov/commonpoc/nhlocatorie.asp. NOTE THAT ALL INFORMATION ON THE SITE IS SELF-REPORTED BY NURSING HOMES. 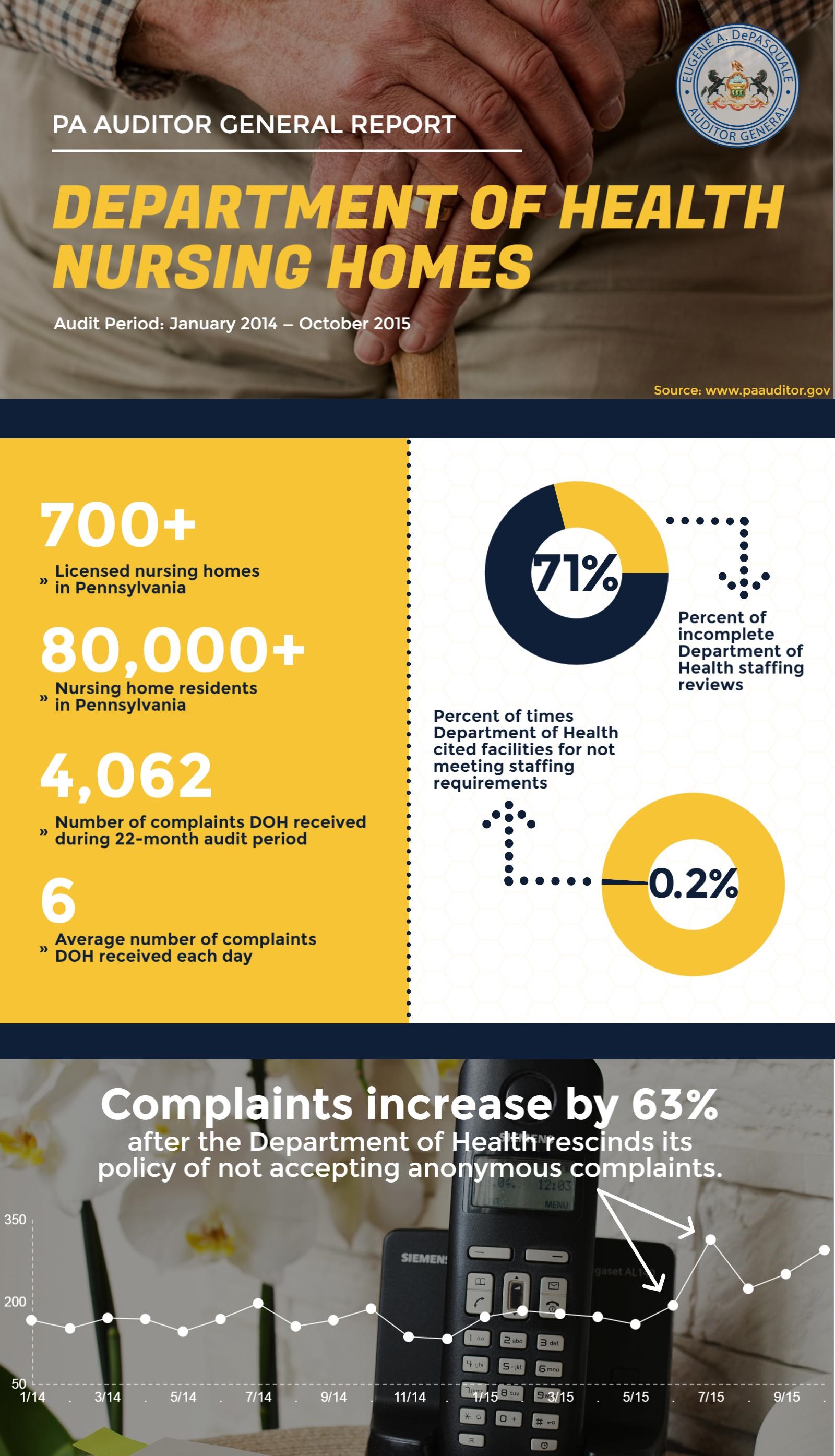