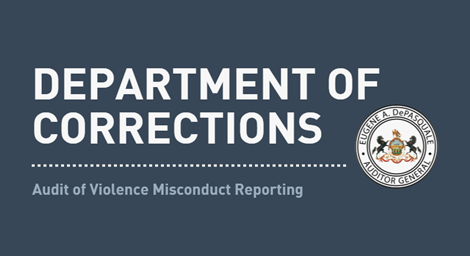 Number of Assaults and Fights Chart

HARRISBURG (Oct. 20, 2016) – Auditor General Eugene DePasquale said today that a recent audit of the Department of Corrections (DOC) shows that while the agency is properly recording reported inmate violence, with more than 4,000 incidents recorded in a 15-month period, the agency must assess staffing and other resources to prevent assaults and fights.

During the audit period of January 2015 to March 2016, DOC reported a total of 4,198 assaults and fights in the SCI system, an average of 65 assaults on staff and 136 inmate fights per month.

“Knowing a prison has a violence problem is one thing, but taking appropriate actions and having enough well-trained staff to prevent the violence in the first place is key,” DePasquale said. “While it is encouraging that the Department of Corrections is keeping good records on violent incidents, they must continually review and improve policies, programs and procedures to prevent inmate violence to protect correctional officers, other DOC staff and the general public.”

DePasquale said DOC is to be commended for its relatively new Swift, Certain and Fair pilot progressive discipline program that it launched at SCI Somerset and several other facilities to respond to inmate misconduct.

“Such innovative programs as Swift, Certain and Fair are commendable, but I encourage the Department of Corrections to continuously monitor its violence prevention policies, programs and procedures, and make adjustments as necessary,” DePasquale said.  “I also urge DOC officials to assess if it has the appropriate correctional officer staff and training.

“As we have observed as recently as last year at SCI Houtzdale, where five correctional officers were injured, inmate violence can quickly escalate,” he said. “We must use every tool possible to prevent such violent outbreaks to maintain a safe environment in our correctional institutions. Having thousands of violent incidents in a prison system of 48,000 inmates does not to me translate into a safe prison environment.”

The audit, which was requested by the Department of Corrections, tested violence reporting procedures in seven of 26 state correctional institutions (SCIs):

DePasquale said while DOC appears to follow proper procedures to record incidents of violence, the reporting system has flaws that prevented auditors from determining whether all incidents were actually reported.

“The violent incidents on the books were properly recorded, but what we don’t know is if there are incidents that did not make it into the books,” DePasquale said.

The audit, which had one finding and eight recommendations, found four violence monitoring administrative areas that should be improved:

• Tracking misconduct forms: DOC does not account for and track all paper misconduct forms, and auditors found gaps in sequential numbering of forms. Accountability over sequential numbering is key to ensuring that forms recorded in the tracking system are completed by staff and are not intentionally or unintentionally discarded prior to entering into the tracking system.

• Procedures for misconducts “dismissed without prejudice”: DOC does not have a procedure to ensure that violent misconducts that are dismissed without prejudice by a hearing examiner are refiled, or require that the employee document the reason the misconduct was not refiled and have the explanation approved by management. Such information is important to ensure that inmates do not believe that violence can be committed without consequences, putting inmates and staff at risk for injury, and that all violent misconducts are recorded.

The 40-page Department of Corrections Violent Misconduct Reporting audit report, which covered Jan. 1, 2015, to March 31, 2016, is available online at: www.PaAuditor.gov.