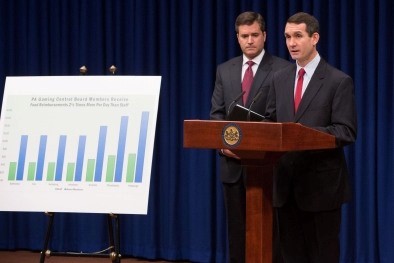 HARRISBURG (Feb. 17, 2016) – Auditor General Eugene DePasquale today said that while the Pennsylvania Gaming Control Board (PGCB) has made significant improvements since the last audit, the board must work to change the gaming law to expand funding for local law enforcement, and bring excessive food reimbursements for board members in line with standard commonwealth policy.

Auditors found that in 2014 nearly $8 million of casino revenue earmarked for grants to help local law enforcement agencies combat illegal gambling was transferred to the state General Fund because of a lack of applicants caused by tight statutory restrictions on the grant usage. Over nearly two years, only six grants were requested and awarded totaling $1,041,000, or 26 percent of the $4 million allocated to the program during that time.

“These funds can be better spent helping our law enforcement agencies than being turned over to the commonwealth. The PGCB has tried various outreach efforts, but the program continues to have more funds available than there are applicants who apply,” DePasquale said. “I strongly encourage PGCB to work with the governor and the General Assembly to amend the gaming law as it pertains to these local law enforcement grants to allow a wider use of the funds to protect our communities.”

Operations improved, but gaming board must curb excessive board member expenses 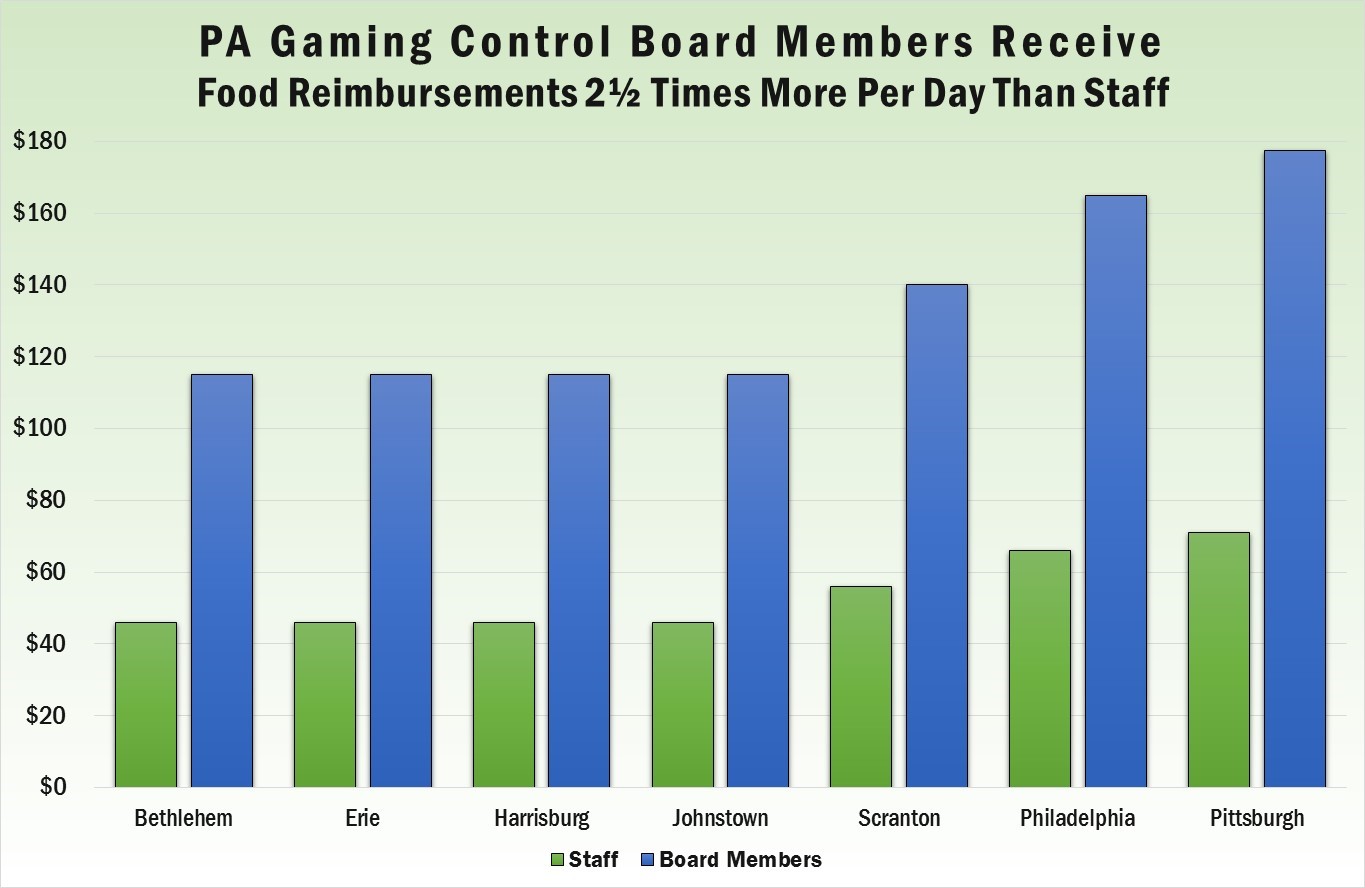 “The PGCB has greatly improved its operations since the previous audit in 2010 when auditors found serious management deficiencies and excessive spending issues,” DePasquale said. “However, our current audit shows that while policies were changed for staff members, when the seven gaming board members travel for board business they are permitted to claim ‘enhanced’ daily food reimbursements that are up to two-and-a-half-times higher. This is despite statutory restrictions in Act 1 of 2010 requiring that both board members and staff be reimbursed only for actual and reasonable expenses.”

“This issue is about more than just dollars and cents; it is about the perception of highly paid board — who are statutorily charged with protecting the public’s interest — being allowed preferential treatment,” DePasquale said, noting that board members are already paid a $145,000 salary for, essentially, part-time work.

“To add insult to injury, these members can then tack on generous meals for their part-time service. The issue is bad public policy plain and simple — not just for the gaming control board, but anywhere such exemptions are permitted,” DePasquale said.

Auditors did find that, overall, the PGCB reduced operational and travel expenses between 2008-09 and 2014-15:

DePasquale said the audit also reveals that the number of jobs created by the addition of table games is 40 percent less than the projections provided to the General Assembly by the gaming industry.

To garner legislative support for table games, the casino industry commissioned a study that showed as many as 10,100 direct jobs could be created from legalized table gaming. The General Assembly passed the legislation in 2010.

In reality, as of June 2015, direct jobs created from table gaming totaled 6,156, which is well short of the 10,100 direct jobs promoted by the casino industry study.

“While the number of jobs realized from table games is less than expected, 6,000 new jobs and people working is a good thing,” DePasquale said. “Going forward, this is a lesson for the General Assembly to more cautiously review job creation projections and estimates related to any legislation under consideration in the future.”

Auditors also found that the PGCB:

• ensures the integrity of table games by authorizing and regulating all table games played in Pennsylvania, as well as conducting audits of all Pennsylvania’s licensed casinos; and

• lacks formal policies and procedures for handling casino patron complaints, but complaints appear to be thoroughly investigated and resolved.

There are 12 casinos operating in Pennsylvania, with another two yet to be licensed. Collectively, these 12 operating casinos employ 17,482 individuals. Through the end of fiscal year 2014-15, the total amount of tax revenue reached more than $11.4 billion since the opening of the first casino in November 2006. The PGCB is fully funded by revenue from the casinos.

The Pennsylvania Gaming Control Board audit report is available online at: www.PaAuditor.gov.

EDITOR’S NOTE: Attached is a chart showing the number of direct table game jobs created at each casino. 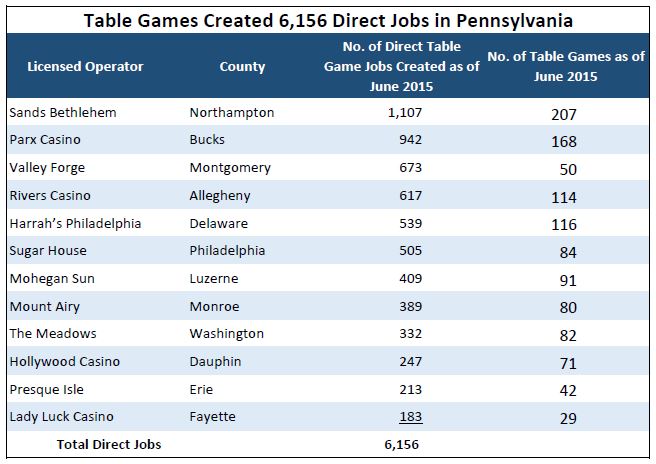