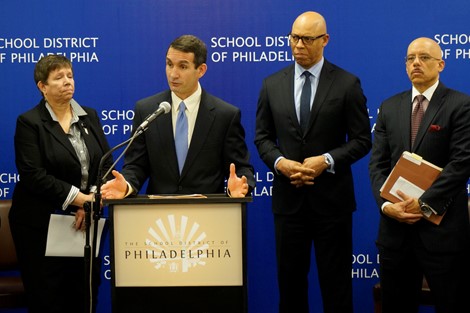 “Two years ago I called for wholesale reform of Pennsylvania’s nearly two-decades-old Charter School Law and the state’s management of charter schools,” DePasquale said. “This audit of the Philadelphia school district’s oversight of the charter schools it authorized is another example of why we need reform.

“It seems to have become an annual tradition for Harrisburg to claim that charter school reform is ‘close’ to being passed, and then absolutely nothing happens. The time has long since passed for the governor and General Assembly to take action, and that is simply unacceptable.  Harrisburg caused the problems identified in this audit, and Harrisburg must fix them,” he said.

“I am particularly troubled by the Pennsylvania Department of Education’s (PDE) payment of $15 million in district-disputed tuition directly to charter schools without apparently giving the district fair hearing.”

The audit, which covers July 2011 through June 2015, has four findings and 19 recommendations.

“Three of the four findings in this audit are above and beyond the control of the School District of Philadelphia,” DePasquale said. “These three findings involve issues or lack of clarity with the Charter School Law and/or the Public School Code, a complete failure PDE, as well as unintended consequences of the 2014 Philadelphia Cigarette Tax Law.”

The audit also finds that the PDE appears to have failed to follow proper procedures in handling tuition disputes between charter schools and the school district.

“The Department of Education paid the $15 million in district-disputed tuition directly to charter schools — withholding the money from the district — seemingly without giving the district a chance to present its side as required by the Charter School Law,” DePasquale said.

During the audit period the district filed 65 disputes, and it appears that PDE has not given the district the opportunity to participate in a hearing on any of them. PDE has also not provided the district with a written reason for not doing so.

“PDE has suggested that the district and the charter schools resolve their disagreements by bringing in a mediator,” DePasquale said. “That might work, but since the charter schools already have the money they do not have an incentive to enter mediation.”

DePasquale also cited a case involving a dispute over enrollment caps that ended up in court. The state Supreme Court determined that PDE improperly withheld $1.5 million from the district’s state subsidies and paid the Walter Palmer Charter School for students enrolled above the cap.

“However, PDE had already paid the money to the charter school and the school has since closed, leaving very little chance the $1.5 million will ever be returned to the district,” DePasquale said. “We are now auditing PDE’s procedures regarding direct subsidy payments to charter schools. We plan to make recommendations – if warranted – to resolve the payment matter,” he said.

While providing an influx of new cash for the district, the cigarette tax law required the district to begin accepting new charter applications for the first time in six years; creating additional staffing and financial challenges.

“Mandating the district to accept new charter school applications subjected it to the tight deadlines required in the Charter School Law that demanded more time from limited staff and resources that were already insufficient,” DePasquale said. “What’s more, additional charter schools will create additional financial challenges for the district, which now pays more than $700 million annually in charter school tuition – that’s more than the entire budget for the Pittsburgh school district.”

DePasquale also said that the district’s role as a charter authorizer has resulted in uncontrollable and unpredictable legal costs, as well as legal complications over enrollment caps, new charter authorizations, appeals from denied applications, and re-authorizations of existing charter schools.

Auditors found that the many levels of costly appeals permitted under the Charter School Law create more costs to the district to defend its renewal or revocation decisions, and legal battles allow ineffective charter schools to stay open, which further drains district finances and puts students’ education at risk.

“These rising legal costs are going to climb even higher as the number of charter school applicants and operators increase and as more charter agreements come up for renewal,” DePasquale said.

District must improve monitoring of its authorized charter schools

“While Harrisburg has culpability in the problems with oversight of Philadelphia’s charter schools, the School District of Philadelphia must also do a better job,” DePasquale said.

Auditors note that despite the district’s charter school costs being nearly 30 percent of its total expenditures in 2013-14, less than one percent of the district’s budget was dedicated to the Charter School Office and the Office of Auditing Services.

“The Philadelphia Charter School Office has been notoriously understaffed, with only six employees during the 2014-15 school year to oversee a system of charter schools with 68,000 students,” DePasquale said. “By comparison, the Pittsburgh school district, which has a total student enrollment of more than 25,000, has 116 administrators.

“While I understand that the district has made progress in the past year to add staff, unless there is a concentrated effort to beef up resources, the district cannot offer proper oversight of its authorized charter schools,” DePasquale said, noting the resources are required for enrollment audits, academic data reviews, formal and informal charter school site visits, and financial reviews.

DePasquale said that a Feb. 16 Pennsylvania Supreme Court decision, which occurred after the audit period, dealt the district and its School Reform Commission (SRC) a major setback in a decision that clearly weakens the SRC and appears to reverse and/or void many of the commission’s actions regarding charter schools over the last 15 years.

“While district solicitors are still reviewing the court ruling, it seems that Philadelphia’s ability to manage its charter school program has been seriously affected,” DePasquale said.

The following SRC actions on charter schools may have been reversed and/or voided by this decision:

• Establishing enrollment caps for charter schools that had not agreed to a limit.

• Shortening the time and effectiveness of charter school hearing procedures.

DePasquale issued a special report entitled “Pennsylvania Charter Schools Accountability and Transparency: Time for a Tune-Up” in 2014 with recommendations to improve accountability, effectiveness, and transparency of charter schools.

At the time he released the report, he said: “Many outstanding charter schools in the state are doing amazing things for children and offering new ways to learn. However, it’s clear that the original intention of the charter school law has not been fulfilled. We owe it to students, parents and taxpayers to re-group and make some fundamental changes to improve oversight and accountability of charter schools in Pennsylvania.”

The School District of Philadelphia’s Oversight and Monitoring of District Authorized Charter Schools audit report is available online at: www.PaAuditor.gov

EDITOR’S NOTE: A separate, standard audit report of the School District of Philadelphia, with a financial component, will be released later this spring.