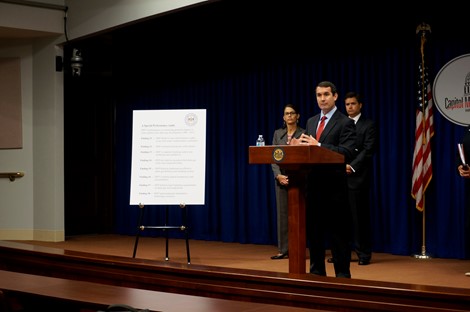 “There are very dedicated hard-working people at DEP but they are being hampered in doing their jobs by lack of resources – including staff and a modern information technology system -- and inconsistent or failed implementation of department policies, among other things, “DePasquale said. “It is almost like firefighters trying to put out a five-alarm fire with a 20-foot garden hose. There is no question that DEP needs help and soon to protect clean water.”

The audit covered the period of 2009 through 2012 and was launched by DePasquale in January 2013 immediately after he became auditor general. The audit’s purpose was to assess DEP’s ability to protect the water quality in the wake of greatly escalated shale gas well drilling.

DEP claims that in many cases such orders are procedurally unnecessary as well operators may have already taken steps to restore the water supply under what the agency terms “voluntary compliance.”

“When DEP does not take a formal, documented action against a well operator who has contaminated a water supply, the agency loses credibility as a regulator and is not fully accountable to the public,” DePasquale said. “When DEP has enforcement authority under the law it must exercise that authority routinely, consistently, and transparently.

Those gas well operators whose actions cause harm to water supplies should not get an enforcement ‘pass’ just because they have convinced DEP that they will come into compliance with the law or that they negotiated a settlement with the property owner.”

Auditors also reported that DEP did a poor job in communicating its investigation results to citizens who registered complaints with the department. The agency was not always timely in meeting statutory timeframes for response to complaints it did receive.

“For example, of the water-related complaints reviewed by auditors, the DEP Williamsport regional office responded to complaints within 10 days, 100 percent of the time, while the DEP Pittsburgh regional office responded to the complaints within the 10-day time period only 64 percent of the time,” DePasquale said. “Why would citizens in the Pittsburgh area have to wait longer for a response than people in the Williamsport area?”

Auditors also noted that DEP’s complaint tracking system, which is used to monitor all environmental complaints, including those that are oil and gas related, was ineffective as it did not provide management with reliable information to effectively manage the program.

“We could not determine whether all complaints received by DEP actually were entered into the system. What’s more, because of how DEP grouped related complaints, it is difficult to figure out exactly how many complaints were received, investigated, and resolved by DEP,” DePasquale said. “While DEP did issue a new policy related to complaint handling, for most of our audit period the existing policy was woefully inadequate. DEP must get that complaint system working.”

In the area of inspections, auditors attempted to measure how quickly DEP was in conducting its initial inspection of shale gas wells, a basic regulatory responsibility. Unfortunately, auditors were thwarted by DEP’s lack of reliable data—learning that only a “needle in a haystack” review of thousands of hard-copy files would ever yield a conclusion. Worse, DEP uses a 25-year-old policy on the frequency of inspections, which has a “loop hole,” that only requires DEP to conduct inspections as it has the financial and human resources to do so.

Auditors also found that DEP does not post to its website all statutorily required inspection information. When the data was tested for accuracy, the auditors found errors of more than 25 percent in key data fields, and that as many as 76 percent of inspectors’ comments were omitted from the online inspection reporting.

“It is unfathomable to us that for a basic responsibility of DEP -- inspecting oil and gas facilities – little criteria exists for when those inspections should occur,” DePasquale said. “Until DEP updates its out-of-date inspection policies, to include mandated inspections at specific critical drilling stages and during the life of the well, it will be nearly impossible to measure DEP’s performance in conducting this very basic responsibility to protect the environment.”

The auditors also noted that DEP does not use a manifest system for tracking shale gas well waste from the well site to disposal. Instead DEP relies upon a disjointed process that includes self-reporting by well operators with no assurances that waste is disposed of properly.

With respect to transparency, auditors discovered that accessing DEP data is challenging as it is a myriad of confusing web links and jargon. The information that was presented on its decades-old eFACTS database was often incomplete—requiring a physical review of hard-copy files at distant offices to verify the actual information.

“Through our audit we found that even conducting a review of hard-copy files is not a fool-proof guarantee, as we found some supporting paper files were missing and DEP was not able to produce them,” DePasquale said. “DEP must improve how it conveys reliable information to the public for an activity that is as high-profile as shale gas development.”

“There was plenty of back and forth with DEP during this audit, and in some cases we just could not agree on some findings,” DePasquale said. “What matters here is the protection of our drinking water supplies. Implementing these 29 recommendations, two of which were directed to the General Assembly, will go a long way now to protecting drinking water resources. When we look back five years from now, I believe everyone will all agree that our environment and our quality of life are better because of this audit.”

Among the recommendations, auditors encouraged DEP to:

“Shale gas development offers significant benefits to our commonwealth and our nation, but these benefits cannot come at the expense of the public’s trust, health, and well-being,” DePasquale said. “We must collectively find solutions to this challenge so that Pennsylvania becomes a leader among states in regulating shale gas development. I am committed to working with the governor, the General Assembly, and other partners to ensure this audit begins that discussion.”

A full copy of the audit report is available here.