“Our students have returned to their schools, but much-needed state funding is stalled by the budget impasse in Harrisburg,” DePasquale said. “It’s causing financial insecurity in schools across Pennsylvania and already forcing some to borrow money.

“Instead of focusing on education, schools across the state are having meetings to try and figure out how to get by every month, and shopping banks for loans that will hopefully allow them to keep the lights on.”

In the past month, Department of the Auditor General staff spoke with officials at nearly 300 school districts across the state. The department will continue to reach out to school districts and release updated borrowing figures every month until the final budget is signed into law.

In addition to loan interest payments and fees, the drawdown on schools’ reserve funds results in a permanent loss off future investment income that could support school programs.

“Every available dollar of school funding should go to classroom education, not interest payments and loan fees,” DePasquale said. “We already are seeing extra costs through borrowing and lost revenue from abandoned investments, and it is certainly going to get worse each day this impasse drags on.

“Even if the commonwealth repays the borrowing costs to the districts and IUs — and that is not guaranteed — the money has to come from somewhere, and that could eat into other parts of the education budget,” he said. “This is already a huge problem affecting districts in rural, suburban, and urban areas. And it is going to turn into a crisis if the budget doesn’t get passed now.”

Some districts are struggling to get loans. For example, Steelton-Highspire School District in Dauphin County reports that it has enough cash to last until the end of September, then it will need to borrow about $8 million. So far, multiple loan requests have been rejected by banks.

“We are seeing the bond ratings for many schools being downgraded, making it even harder and more costly to borrow money to keep classes open until the state budget is resolved,” DePasquale said. “Who is going to help these school districts?”

More than 169,283 students are enrolled in the school districts and intermediate units that reported borrowing to date:

“The number of schools and the amounts being borrowed are going to go up exponentially the longer the budget stalemate goes on,” DePasquale said, noting that the Pennsylvania Department of Education did not make its September education payments to schools, and PDE will likely miss the next monthly installment due to schools on Thursday, Oct. 1. Information provided today does not include data from 200 school districts auditor general staff have not yet spoken to as of September 28.

“Based on our conversations with school districts so far, at least 28 additional districts and two more intermediate units will be forced to borrow an estimated total of $122 million in October.”

DePasquale said that in addition to Pennsylvania’s state budget woes, there is a possible federal government budget stalemate that could turn off funding to the states, including money for education.

“If these two budget stalemates collide, we are looking at what I would call an ‘imperfect storm,’ as there is certainly nothing ‘perfect’ about the pain and disruption such a scenario could foist on students, parents, teachers, and taxpayers,” DePasquale said.

The auditor general noted that the budget problems are also affecting charter schools because some school districts are reducing or stopping tuition payments to charters until state money begins flowing.

A summary of the results from school districts and intermediate units is available online here. 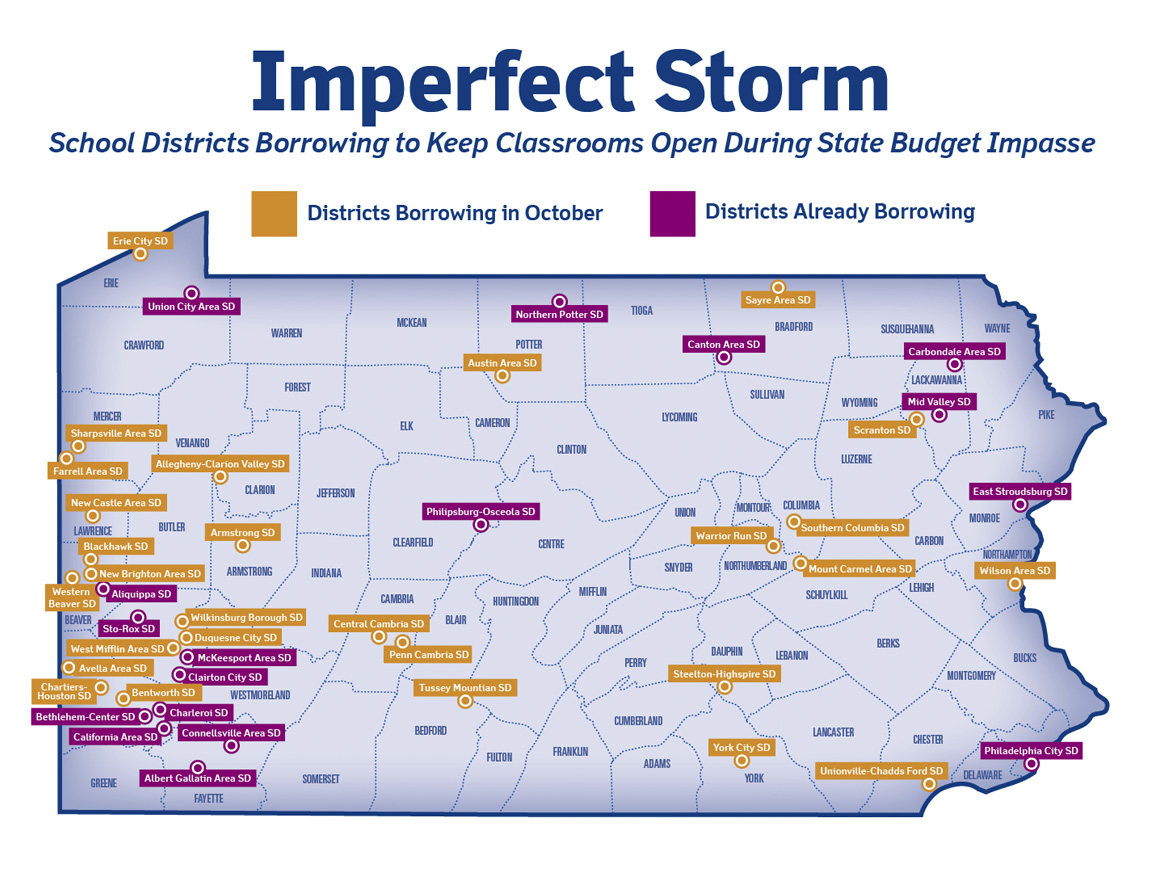