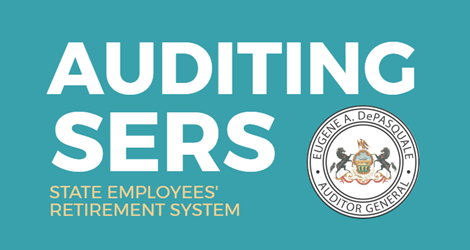 “SERS is moving in the right direction by starting to address many of the issues I’ve been pushing for in the past four years, including reducing investment fees and using more passive investments,” DePasquale said. “However, there is still room for improvement.

“Every dime going to Wall Street managers is not going into the pension funds that desperately need it, and adds additional stress to Pennsylvania’s budget situation,” he said, noting that SERS’ investments returned 6.5 percent in 2016 which is below its expected return of 7.25 percent and significantly lower than the national median return of 12.4 percent.

The audit also highlights the need for the Public Employee Pension Forfeiture Act to be legislatively broadened.

“The language of the Public Employee Pension Forfeiture Act is outrageously restrictive and creates loopholes where workers can be convicted of a sex crime and still keep their pensions,” he said.

As with many public retirement systems, SERS faces a large unfunded liability. In 2000, SERS was overfunded by 32 percent and remained over 100 percent through 2004. Legislative changes in 2001 to increase benefits and to allow underfunding of employer contributions, coupled with economic downturns, reduced the funding level to 58.7 percent with a projected unfunded liability of $19.5 billion this year.

“I am pleased that SERS is working to reduce the fees paid to Wall Street,” DePasquale said. “I commend SERS for achieving considerable cost savings so far. Nonetheless, my audit found that SERS can still save more by taking every opportunity to negotiate lower fees and by competitively bidding every contract, every time.”

Auditors noted that while SERS procured investment consultants in accordance with its written procedures, it did not adequately pursue competitive offers and failed to document fee negotiations.

In 2015, SERS extended the contract with its real estate consultant for two years without considering other qualified consultants. The scope of work in the contract was expanded to cover SERS staff turnover and the annual retainer more than doubled from $348,000 to $728,000.

Prior to the 2015 contract extension, SERS approved a new contract with the same contractor every five years since 1994; it was last competitively bid in 2009.

“When you are spending public dollars it is critical to ensure you are getting the best value for every single dollar,” DePasquale said. “Rubber stamping a contract without competitively bidding is an affront to everyone paying into the SERS fund. Things change rapidly in the financial and real estate business and the SERS board owes its members a fiduciary duty to always consider other candidates that could offer competitive bids.”

“As highlighted in my Public School Employees’ Retirement System audit in May, it is clear there are problems with the language of the Public Employee Pension Forfeiture Act,” DePasquale said.

Statutory language in the 2004 amendment to the act limits pension forfeiture to school employees who commit crimes against students, which does not apply to the majority of SERS members. Auditors found three instances where a SERS member was convicted of one of the sex crimes listed in the act, but the individual was able to keep their pension benefits because the victim was not a student:

“No public employee or official should be able to receive pension benefits after using his or her position to commit such heinous crimes,” DePasquale said. “The Public Employee Pension Forfeiture Act and the SERS retirement code must be broadened to mandate pension forfeiture upon conviction of a sex crime against any individual who did not, or is not able to, give informed consent.

Improve Board Education and Attendance Policies

Auditors found that SERS did not have a formal education program in place to assess and document the investment knowledge and skills of each board member and designee.

Prior to June 2017, neither the State Employees’ Retirement Code nor the SERS board bylaws required trustees to possess a minimum level of investment or financial knowledge.

In June, the General Assembly enacted Act 5 of 2017 which amended the SERS and PSERS retirement codes to require board members to obtain eight hours of mandatory training in investment strategies, actuarial cost analysis, and retirement portfolio management on an annual basis.

“Requiring some level of financial education is a good start,” DePasquale said. “Trustees have a significant fiduciary responsibility and absolutely need some level of investment education to make informed decisions for the nearly 240,000 Pennsylvanians who rely on SERS. I encourage SERS to go a step beyond the legislative requirements by finalizing, adopting, and implementing the draft education policy that was presented to the board at its meeting last month.”

Additionally, DePasquale said the board does not have a formal attendance policy for regular meetings.

The SERS board is made up of 11 members, which is slightly larger than its peer state systems where the average board size is nine to 10 members.

Also, unlike PSERS, the governor has unusually strong control over the selection of SERS board members, including selection of the chairman. Until Act 5 of 2017, a majority of the board members, six of the 11, were appointed by the governor. Act 5 changed the composition to give the governor five appointments and added the Secretary of Banking and Securities as an ex-officio voting member to both SERS and PSERS boards.

Additionally, DePasquale noted the board places too much reliance on the individual trustees to self-report potential conflicts of interest and the board’s policies, procedures, and training regarding ethics need to be strengthened.

Overall, SERS management agreed or partially agreed with the audit findings and in its formal response committed to implementing many of the suggested recommendations. SERS’ response to the audit report is included in its entirety starting on page 91.

The SERS audit report is available online at: www.PaAuditor.gov. 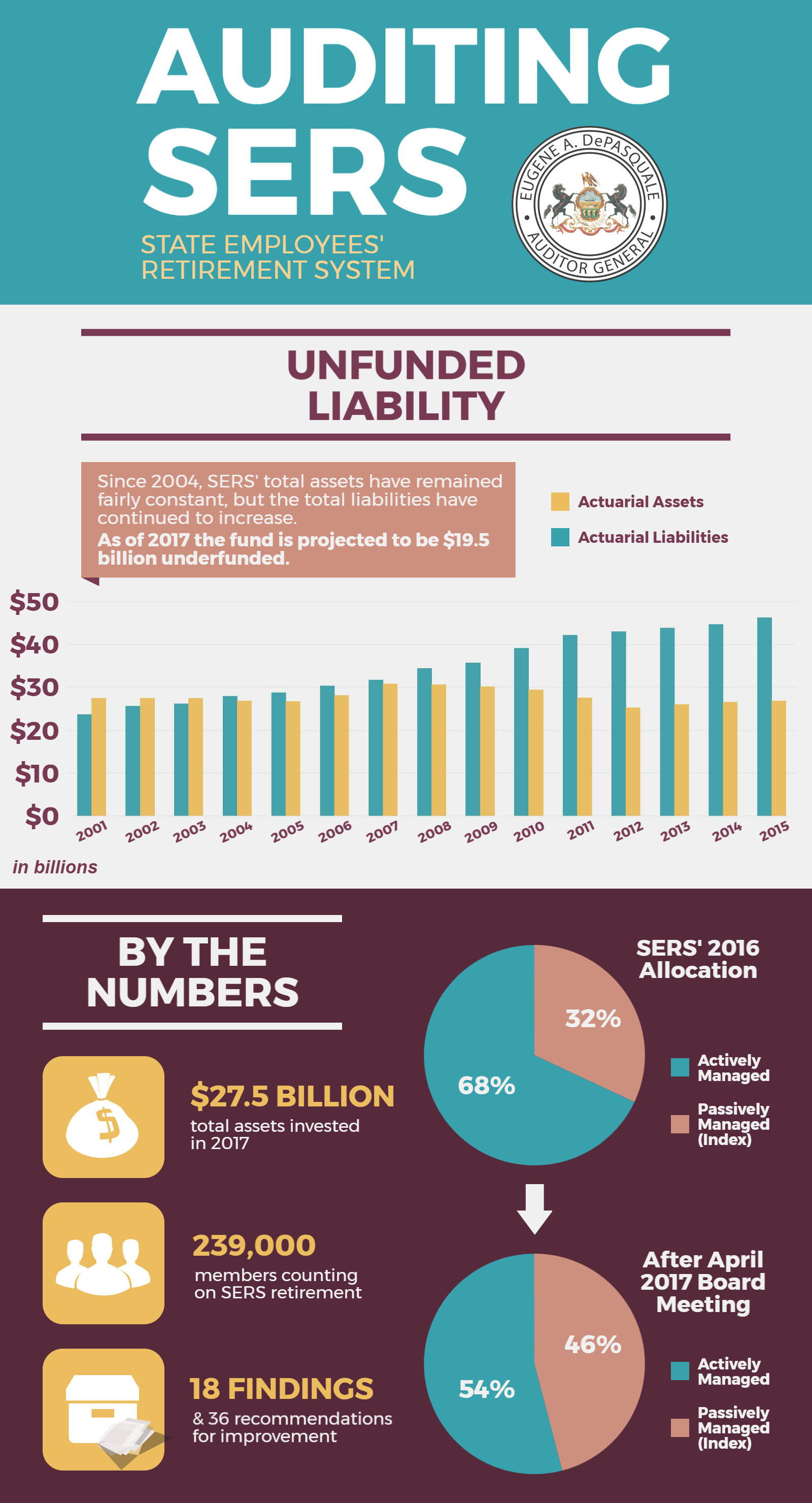