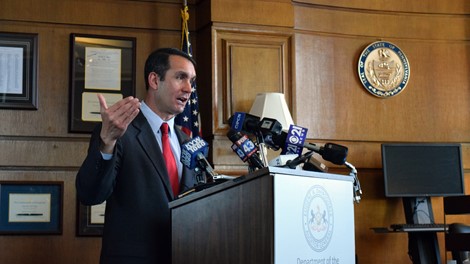 “People have a right to be frustrated by what we found here,” he said. “If L&I had appropriately accounted for SIIF funding from the beginning, we may not be dealing with this chaos and looking at such high costs to address the problems going forward.

“This audit is about more than finding out what happened to the money and how much additional funding is needed to fix the problem,” DePasquale continued. “It is about providing the people of Pennsylvania with the level of service they deserve. It’s about the 312,000 Pennsylvanians who tried to call the UC service centers in January and got a busy signal 99.3 percent of the time. The Department of Labor & Industry must do better.”

In January, DePasquale launched an audit of the SIIF, which was created by Act 34 of 2013 to temporarily supplement the decline in federal funding L&I uses to administer the UC program.

When legislation to extend SIIF funding for 2017 failed in December 2016, L&I cut $57.5 million from its budget, resulting in the closure of three of the eight UC service centers and the furlough of 488 employees, which led to long delays and busy signals on 99.3 percent of calls for UC services in January.

The audit examined how L&I used SIIF funding from 2013 through 2016, whether the expenditures conformed to Act 34 guidelines, and how much funding would be needed in the next four years to maintain efficient operation of the UC program and to avoid additional budget cuts.

• L&I spent a total of $178.4 million from the authorized SIIF funding during calendar years 2013 through 2016, but did not use proper accounting methods to record SIIF expenditures.

• L&I estimates that an additional $38.5 million would be needed to recall furloughed employees for one year.

“The numbers are stunning,” DePasquale said. “L&I must immediately work to make administration of Pennsylvania’s unemployment compensation program operate more efficiently to serve residents who are forced to use the system when they lose their job through no fault of their own.

“There is no question that improvements to the UC system were made but, because L&I failed to use proper accounting methods to record and track SIIF funds, my team was unable to determine whether all the funds were used appropriately,” DePasquale said, noting that SIIF funds come from a portion of payroll taxes paid by all employees, not the state’s general fund.

Auditors found that L&I did not separately record specific expenditures in the SIIF account, but rather lumped all expenditures together. Additionally, the annual Act 34-required reports to the governor and General Assembly were not submitted until January 2016 — more than a year and a half late — and contained too few details to be reliable or of value.

According to L&I, if no additional funds are received from the state, the department will need to close three more UC service centers between 2017 and 2018.

To maintain the current operation of five UC service centers — without the $38.5 million needed to recall staff furloughed in 2016 or $63.8 million to replace its ancient computer system — L&I anticipates annual operating deficits of:

“The $15 million stopgap funding is a step in the right direction,” DePasquale said. “However, when $12.1 million is needed just to break even this calendar year, there will not be much money left to recall staff furloughed in December, and nothing to put toward replacing the ancient computer system behind the whole operation.

“If the $15 million stopgap funding is used to recall staff and reopen a call center, L&I will still be facing a $12.1 million deficit, without even addressing the cost of a new computer system.”

When SIIF funding was not extended in December, L&I predicted that without a long-term funding solution, additional service centers will need to be closed, ultimately resulting in online-only claims filing.

“Based on the information available, my team not only found that L&I’s prediction was reasonable, but inevitable,” DePasquale said. “We’ve already experienced the disastrous results of reducing the number of service centers from eight to five.”

Since January, UC program users have experienced delayed claims processing and payment as well as a major decline in customer service, including claimants not being able to get through on the phone lines and experiencing long wait times to speak to a service representative.

“Busy signals skyrocketed to 99.3 percent of calls in January, and calls that made it into the waiting queue experienced long hold times,” DePasquale said.

“This level of service is completely unacceptable and a lot of people were left wondering why these three particular service centers were shut down,” DePasquale said. “Details about why L&I chose to close the Allentown, Altoona and Lancaster service centers has not been well explained until this audit.”

In deciding which three service centers to close, L&I considered the following:

• Economics of the location, including unemployment rate,

• Number of employees at the location,

• Downsizing all locations versus closing a few,

• Leased buildings versus state owned, and

• No telephone assistance to any UC claimants,

• Operations of all remaining UC staff focused on processing and paying claims, and

• Long delays in claims processing with insufficient staff levels to handle the volume.

“Based on L&I’s projections, $12.1 million is needed to avoid closing more service centers this year and $38.5 million is needed to recall furloughed staff for one year,” DePasquale said. “The era of online-only UC claims could be a reality within two years, assuming the ancient computer system can handle the additional volume.

“Not every claimant has access to a computer to file and monitor their claims online. The people who rely on the program are the ones who are going be impacted most, which is why it is imperative that L&I work with the General Assembly for a long-term financial solution for the UC program.”

The audit acknowledges that L&I is in dire need of a new computer-based benefits delivery system to replace its ancient mainframe computer system that is more than 40 years old, very expensive to maintain, very difficult to modify and inefficient.  Upgrading the system is estimated to cost $63.8 million over four years.

“L&I identified the computer system upgrade as a top priority and it should be,” DePasquale said.  “The reality is that given the difficulty people experienced on the phones earlier this year, shifting more services online could cause the collapse of the entire computer system and no amount of staff will be able to provide unemployment checks to people who qualify.

“We are two decades into the 21st century, yet the hundreds of thousands of Pennsylvanians who use the unemployment compensation system each year are relying on an ancient mainframe computer being held together with bubble-gum and rubber bands,” DePasquale said.

L&I is currently evaluating proposals to restart and complete the computer modernization project it started in 2006.

The Pennsylvania Department of Labor and Industry Service and Infrastructure Improvement Fund audit report is available online at: www.PaAuditor.gov.