Auditors find that 310,000 students in those schools could be in jeopardy of inadequate education 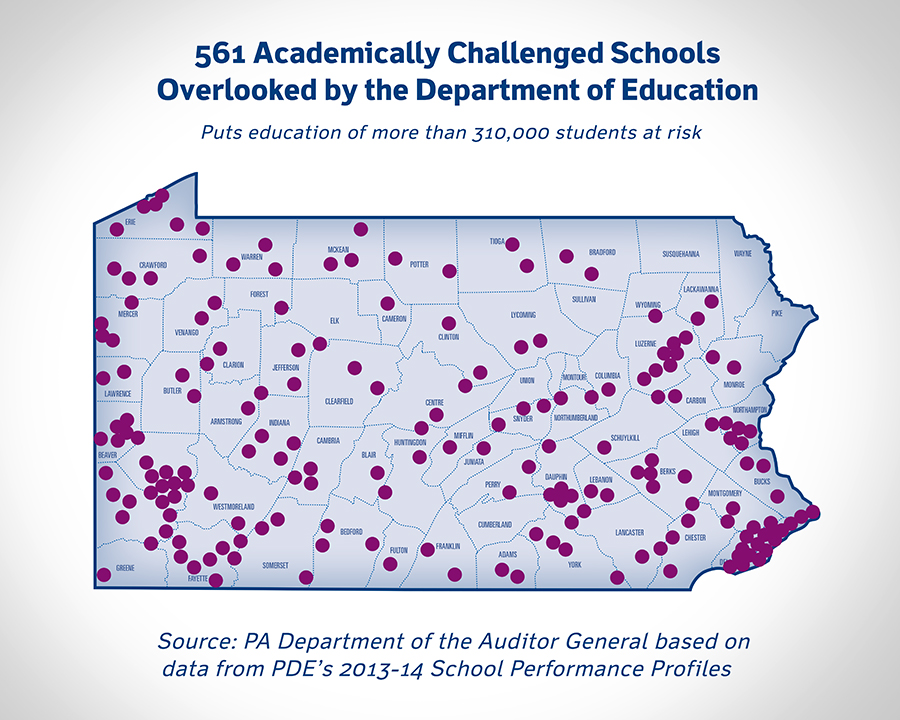 The 89-page audit report, which covers July 1, 2010, through Aug. 1, 2015, includes the results of two performance audits of PDE and 30 recommendations for improvement to address four findings:

• Board of Education failed to update the master plan for basic education since 1999,

• PDE failed to monitor special advisors and assistants, and

“The Pennsylvania Department of Education is failing our students and the taxpayers by essentially overlooking 561 academically challenged schools,” DePasquale said.  “It is astonishing to me that so many schools — with more than 310,000 students — may not be receiving the extra support they need to help their students succeed academically. If PDE continues to overlook these institutions and the students they serve, more and more children will struggle scholastically further down the road.

“It also is disturbing that for 16 years, the State Board of Education — which is responsible for setting statewide education policy — failed to develop and implement a statutorily required basic education master plan to be issued every five years. The plan should be current, and it should be aligned with the ever-changing education landscape, including technological advances, requirements under the federal No Child Left Behind Act, and the explosion of charter schools,” he said. “The world is far different than it was in 1999, and our educational system must have a plan that can adapt to meet changing demands.”

When auditors used school performance profile scores for 2013-14, they identified 814 academically challenged schools with scores below 70.  Of those, 561 schools received no substantial assistance to improve academic performance. The only schools that received additional academic assistance were a fraction of the schools classified by the federal government as “Title I” — schools that have a high percentage of students from low-income families.

Special assistance for academically challenged schools may include specialized staff, referred to as Academic Recovery Liaisons, who work with school administrators to develop and implement programs tailored to each school.

“We found academically challenged schools in all but eight counties across Pennsylvania, in remote counties, suburban counties, and large cities,” DePasquale said. “All the students in these schools have fundamental rights to a fair and effective educational system secured by our state constitution, one that gives them hope and tools for successful and productive lives. We must do better to ensure these schools improve. There just is not any other option.”

Auditors made several recommendations for improvement in the area of academic performance including a three-step plan to help all academically challenged schools. The plan includes convening a broad range of experts to develop recommendations to improve the poorest-performing schools; evaluating PDE’s current organizational structure to focus on improving academic performance of all schools; and creating a partnership with school districts to provide necessary direct support to districts with academically challenged schools.

Board of Education failed to update master plan since 1999

Auditors found that the State Board of Education has not updated since 1999, the commonwealth’s master plan for basic education, which is required by the Public School Code. Failure to update this plan means Pennsylvania lacks a strategic planning document to guide policy makers and educators to implement efforts to address the difficult issues confronting today’s educational system.

“The Board of Education must get to work, and focus on, putting a master plan and related regulations and policies in place to make sure our students are getting the education they need,” DePasquale said. “We have the largest state board of education in the country, and they still haven’t fulfilled their main statutory requirement for 16 years. Clearly, something needs to change.”

“While there is evidence the special advisor for higher education showed up for work, there are virtually no work products or emails, with the exception of a budget memo he wrote — the content of which was never used in the final budget presentation,” DePasquale said.

“At a nearly $140,000 a year salary, that’s nice ‘work’ if you can get it, and is one of the more egregious employee-related findings we have found in any of our education audits,” he said, comparing it to a recent finding in an audit of Bangor School District, Northampton County, where an ex-superintendent received $142,000 for a no-work consultant job.

Auditors found that PDE often relied on annuitants — retired commonwealth employees who returned to work for PDE on a short-term emergency basis.  The audit found that PDE failed to monitor these annuitants to ensure that they did not exceed the statutorily set 95-day maximum number of days these employees are permitted to work per year.

During the audit period, PDE rehired 38 annuitants, which cost PDE approximately $1.4 million. Annual wages ranged from $314 to $40,397. At least four annuitants were used over multiple years to fill critical administrative positions, such as director of human resources, assistant directors and special assistants.

From the field of 38, auditors examined records for nine annuitants and found that one of the annuitants violated the 95-day rule in two years.

“The challenges faced by our basic educational system are daunting, but they are not impossible to tackle,” DePasquale said. “PDE and the Board of Education must get their respective houses in order.

“Solving these problems also will take strong commitments by the governor and the General Assembly to make sure the Department of Education and our schools have the adequate academic and financial support to provide a solid foundation for student success.  Failing to act will have devastating consequences for students and Pennsylvania’s economy.”

A copy of the audit of the Pennsylvania Department of Education and State Board of Education is available here.