“The Scranton School District is in self-inflicted financial and operational distress,” DePasquale said. “There is way too much finger pointing going on in this district, and no one is taking responsibility for anything.

“Unless the district makes significant operational changes and reverses the current state of its financial affairs it may well be placed in Financial Recovery Status which means loss of local control of district operations,” he said.

The 107-page audit report, which covers July 2012 through June 2016, contains nine findings and 38 recommendations for improvement.

The district had a cumulative general fund operating deficit of more than $25 million over the four calendar years from 2012 to 2015. During that time, district spending increased almost 13 percent, or $16 million, primarily driven by instructional expenditures, including salaries, benefits, and pensions. The district also spent over $2.7 million during the audit period to settle special education lawsuits.

“This is, by far the worst debt situation of any school district in the state,” DePasquale said. “To put it bluntly, Scranton School District can be compared to a compulsive shopper: recklessly spending more money than it has in income.”

DePasquale said the district had made some cuts, including changing school start and dismissal times to reduce the number of buses needed to transport students, but the district has done little to reduce overall administrative costs.

To keep functioning and meet debt service payments, district officials borrowed $4 million in 2013 and 2014 from the capital projects fund, which is typically reserved for building maintenance, and in 2015 took out a $62 million bank loan.

“Scranton School District is taking out loans to pay for a loan,” DePasquale said. “Such a financial shell game – while not prohibited by the Public School Code — is unsustainable in the long-term.”

DePasquale said the district does not have a revenue problem, noting that total revenues increased by 13 percent over the four-year audit period.

Diving deeper into the financial mismanagement, auditors found over 12 years, the district circumvented payment procedures, improperly provided health benefits, and failed to issue required Internal Revenue Service and  Pennsylvania Department of Revenue tax documents for a mechanic performing services as a non-employee of the district.

“For more than a decade, Scranton School District paid a non-employee mechanic for work vaguely described on invoices to the district’s automotive fleet,” DePasquale said. “In addition, the district provided the mechanic and his spouse health and dental care coverage.”

Between 2010 and 2016 the district paid the mechanic $672,321. Payments to the mechanic for 2005 through 2009 could not be determined because district officials said those records were unavailable beyond the seven year retention period.

Auditors also found that the mechanic submitted vague invoices for payment directly to the district’s chief financial officer, instead of through the maintenance office, which could have documented that the services were indeed completed. Purchase orders were prepared by the chief financial officer after the invoices were submitted to the district.

“District personnel were unable to obtain a completed IRS W-9 Form from the mechanic, but they continued to pay him. This whole situation is simply unbelievable.”

The mechanic – who is not an employee of the district -- and his spouse received district-paid medical and dental insurance coverage for more than 11 years, beginning Jan. 1, 2006, and ending April 30, 2017 when his insurance was cancelled after the auditors questioned why a non-employee received the same health benefits as a full-time employee.

DePasquale said he is referring the audit finding to the IRS and the Pennsylvania Department of Revenue.

DePasquale gave district officials and the board an “F” for failing in their oversight of a $26 million student transportation contract that included over $4 million in questionable fuel surcharges over 10 years.

“Scranton School District must get its student transportation costs in line,” DePasquale said. “Costs associated with a no-bid contract with the same bus contractor the district has had since the 1990s are contributing to the district’s financial decline.”

“Most striking, however, was the trend of increasing payments during much of that period,” DePasquale said. “The district did not effectively monitor the annual daily rate per bus, resulting in the rate increasing from a contracted rate of $193.13 in school year 2006 to $306.54 in 2016 — a 59 percent increase over a 10-year period.

“That’s a real windfall for the bus contractor, but it is a drain on the district’s taxpayers,” he said.

The daily rate increased not only because of a 3 percent annual increase in the daily rate that was built into the original contract, but also because of an additional compounding 4 percent fuel surcharge levied in an unsigned 2006 addendum.

“This addendum resulted in an automatic 7 percent annual increase in payments for the bus contractor,” DePasquale said. “I am sure many Scranton residents would love to see their paychecks increase by 7 percent each year.

“The contract allowed for the establishment of daily rates that had no relationship to actual fuel costs, mileage, or occupancy of the buses, and the district did not question the daily rates charged by the contractor,” he said.

The original contract and each subsequent extension were not procured through a competitive bidding process.

“While competitive bidding is not required by the Public School Code, the district’s lack of bidding for a multi-million dollar contract is nonetheless very concerning,” DePasquale said. “I once again call on Scranton School District – and all school districts – to employ competitive bidding of all transportation contracts.”

Auditors also found the district’s transportation expenditures exceeded “final formula allowance” by more than $11 million during the 2012-13 through 2015-16 fiscal years.

The payment structure outlined in the district’s transportation agreements were based on a per-vehicle daily rate, which did not align with the mileage calculations that Pennsylvania Department of Education (PDE) uses to reimburse school districts for transportation expenditures.

“As a result, the district had to use over $12 million in other revenue, in addition to transportation reimbursement from PDE, to pay for transportation expenditures,” DePasquale said. “That’s $12 million that unnecessarily went to a bus contractor instead of into classrooms to educate students.”

The district also incorrectly reported the number of charter and nonpublic school students it transported, resulting in a reimbursement overpayment of $128,590 to the district by the Department of Education.

Auditors found that twice in three years, while the district was in a declining financial position, it offered enhanced retirement incentives – an additional $15,000 per year for seven years — without a commitment to specific offsetting cost reductions and without a prior cost-benefit analysis.

The additional incentives replaced standard retirement incentive of $10,000 per year for seven years, a benefit not typically found in other school district’s contracts.

“As a result of these incentives, the district added more than $1 million to its ongoing general fund liabilities for the 2015 calendar year alone,” DePasquale said.

“It is long past time for the dysfunctional Scranton School District board and administrative staff to start acting like responsible adults and focus their energies on doing what is right for the district’s 10,000 students and thousands of taxpayers,” DePasquale said.

In addition to referrals to the IRS and the Pennsylvania Department of Revenue, referrals to other responsible authorities are being considered by the Department’s Office of Chief Counsel, including to PSERS. The Scranton School District audit report is available online at: www.PaAuditor.gov.

EDITOR’S NOTE: Following are copies of two invoices submitted by a non-employee mechanic referenced in Finding 5 starting on page 57 of the audit report. 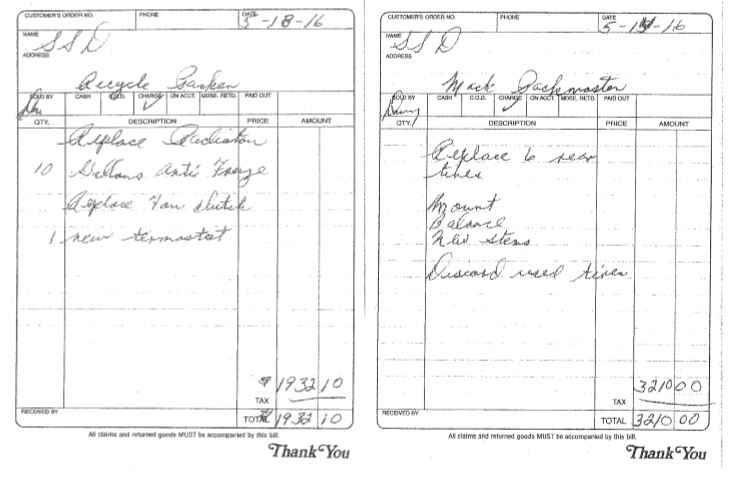