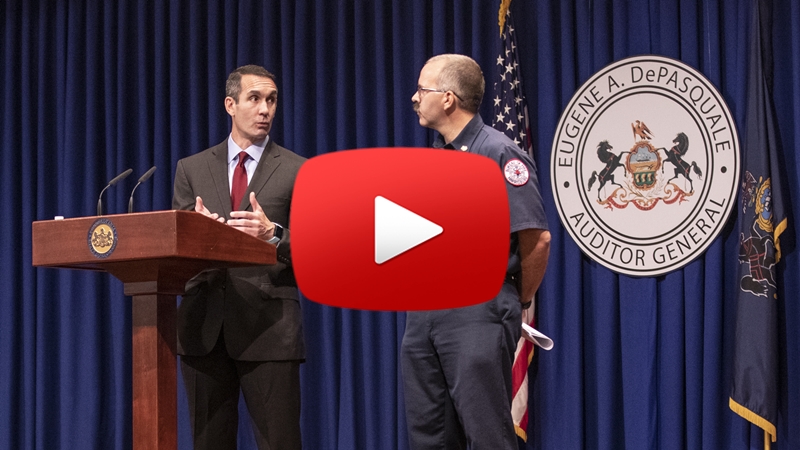 HARRISBURG (Sept. 5, 2019) – Auditor General Eugene DePasquale today called for changes to state law to give volunteer firefighters more flexibility to use the state aid they receive to help protect their communities.

“When we have an emergency, we count on firefighters to come to our aid,” DePasquale said. “But the way fire companies operate is changing and the brave men and women willing to risk their lives to protect us need our help.”

“Some relief associations have met their operational funding needs and have accumulated significant reserves that they may be unable to spend because of the restrictions contained in state law,” DePasquale said. “At the same time, relief associations statewide are having difficulty recruiting new volunteers and struggling to provide support to their affiliated fire departments.”

“Because of the way the current law is written, relief associations lack the flexibility to fully use their allotment of state funding to help other volunteer firefighters protect our communities,” he said.

The recent audit of the York Volunteer Firemen’s Relief Association, which has more than $4 million in cash and investments, highlights the need for changes in the law.

“In fact, there are nearly 60 volunteer relief associations sitting on a reserve balance above $1 million because current law severely restricts how they can use the money. I want to make sure that state funding intended to help volunteer firefighters is doing exactly that.

“I’ll bet if you ask any one of these associations how they could use this money to help recruit, equip and protect volunteer firefighters, they’d give you a list a mile long. But, then they would tell you they are not allowed because the law is so narrow that it’s hurting firefighters. Clearly, the law must change.”

DePasquale was joined by Harrisburg Fire Chief Brian Enterline in calling on the General Assembly to fix the law so that state funding can be used in a way that better meets local needs.

Act 118 of 2010 governs the overall operation of volunteer firefighter relief associations and restricts how state funding may be spent. The list of eligible expenses is found online here.

VFRAs receive state aid from a 2 percent state tax on fire insurance premiums purchased by Pennsylvania residents from out-of-state casualty insurance companies. In 2018, 2,518 municipalities received $55.1 million for distribution to VFRAs to provide training, purchase equipment and insurance, and pay for death benefits for volunteer firefighters. The Department of the Auditor General distributes the state aid following a formula set in Act 205 of 1984.

“The formula that directs where state funding goes has not been updated since 1984,” DePasquale noted. “The way communities provide fire protection services has changed a lot in the past 35 years, and the General Assembly needs to bring the law into the 21st century.”

DePasquale said regardless of whether relief associations have cash reserves, Pennsylvanians should continue to generously support local fire departments and also consider volunteering.

Review the York Volunteer Firemen’s Relief Association of the City of York audit report and learn more about the Department of the Auditor General online at www.paauditor.gov.

Editor’s Note: Following is a list of 59 Volunteer Firefighters’ Relief Associations with a fund balance above $1 million since 2015 according to the most recent audits conducted by the Department of the Auditor General. 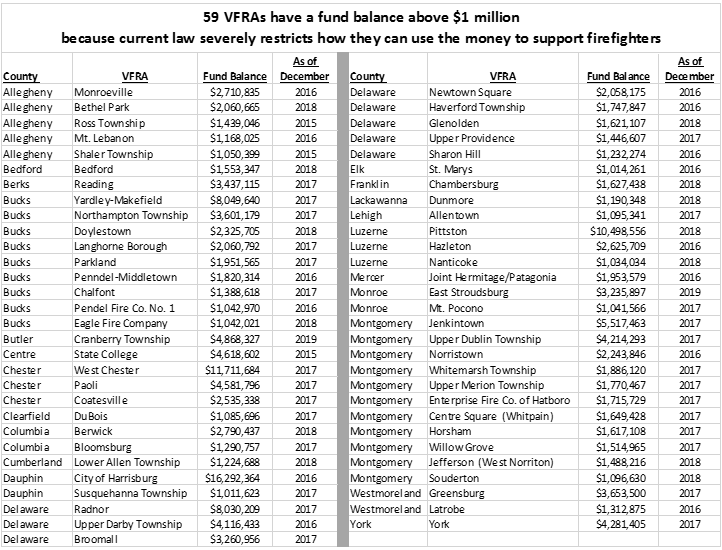