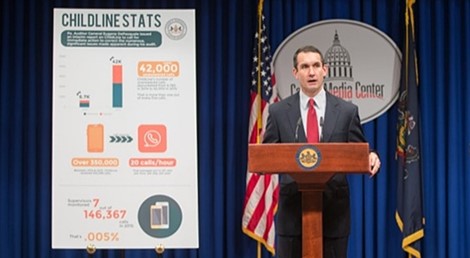 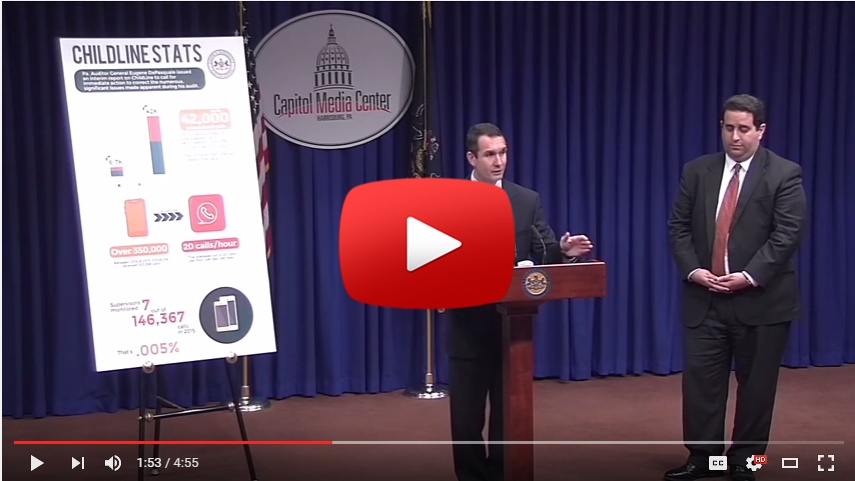 HARRISBURG (May 24, 2016) – Thousands of children across the commonwealth could have been left in dangerous situations, Auditor General Eugene DePasquale said today, because of severe deficiencies at ChildLine, the state hotline for reporting suspected child abuse and neglect.

ChildLine, which is operated by the Department of Human Services (DHS), began in 1975. In the last few years, sweeping changes to the Child Protective Services Law (CPSL) have meant increased call volumes at ChildLine, which operates 24 hours per day, 7 days per week.

“While strengthening laws to combat child abuse was a critical achievement, not providing the funding to enforce those laws was a disturbing failure,” DePasquale said. “Our report shows the results of that failure — 42,000 unanswered calls in 2015.

“The critical problems our audit team has found so far simply cannot wait even another few months until this audit is finished,” DePasquale said in announcing the release of only the third interim report since he became auditor general in 2013.

“I’m sounding the alarm as early as I can on these issues because even one unanswered phone call means there could be a child in a life-threatening situation who needs help,” DePasquale continued. “The ChildLine system hasn’t been functioning in a way that leaves me any confidence that a child can get help when it is needed.”

• ChildLine was constantly understaffed in 2015,

• Nearly one-third of all calls received in 2014 and 2015 were not tracked or documented, and

When a call comes in to ChildLine, one of three things can happen. The call can be:

• Answered, meaning the caller is able to report suspected child abuse or neglect,

• Abandoned, which means the caller hangs up while waiting in the call queue, or

• Deflected, meaning that, once the call queue is full, subsequent calls are immediately terminated. As of Oct. 15, 2015, the queue could hold 30 calls.

“In 2015, nearly 42,000 calls were not answered, meaning they were either abandoned or deflected,” DePasquale said. “That is more than one out of every five calls. That is alarming and unconscionable.

“Any single one of those unanswered calls could have been a life-or-death situation — and even one neglected or abused child in the commonwealth is one too many,” DePasquale said.

DHS’s goal is for only 4 percent of calls to go unanswered. The goal was met in 2014, not in 2015. However, DePasquale called even that percentage unacceptable.

“DHS’s goal should be to answer and track the outcome of 100 percent of the calls,” he said.

“That’s one-third of all the calls that came into ChildLine over those two years,” DePasquale said.

DHS told auditors that these were calls that provided no information or concerns regarding a child. However, because DHS does not track all calls, it could provide no documentation to support that assertion.

ChildLine does not have a policy in place for monitoring caseworkers’ calls, auditors found.

Before 2014, caseworkers were monitored on a daily, weekly, biweekly, or monthly basis, but as call volumes increased in 2014 and 2015, supervisors had to help process referrals, so monitoring switched to an “as-needed basis.”

“With virtually zero monitoring, we have no idea if caseworkers properly handled calls,” DePasquale said. “Given the new laws and regulations, monitoring should have increased.

“In addition, this means that, for the 111,000 calls that did not end in a referral somewhere, we have no record of the reason for the call and no one monitoring the caseworkers’ decisions not to make referrals.”

At no point in 2015 was ChildLine adequately staffed, auditors found. They also discovered that DHS does not determine minimum staffing levels based on the expected volume of calls; instead, levels were based on staff availability and the desire to keep overtime limited.

“It’s time for DHS to immediately hire enough caseworkers to handle ChildLine’s call volume,” DePasquale said. “It is imperative that trained professionals be available and ready to answer the public’s calls.”

DHS has struggled to establish and maintain a full complement of caseworkers, auditors found.

“Lawmakers voted for this legislation but did not provide the funding necessary to effectively enforce it, while DHS should have been unrelenting in its demand for adequate resources,” DePasquale said, acknowledging that DHS has made some progress in hiring more caseworkers.

“I am pleased that since the start of our audit, DHS has been working to address staffing needs, but they need to act more quickly. We are talking about the health and well-being of children, which means there is no acceptable excuse for not handling every single call in a timely, efficient manner.”

The audit of ChildLine continues, and the final report is expected by the end of the year. The ChildLine Interim Report of Significant Matters is available online at: www.PaAuditor.gov. 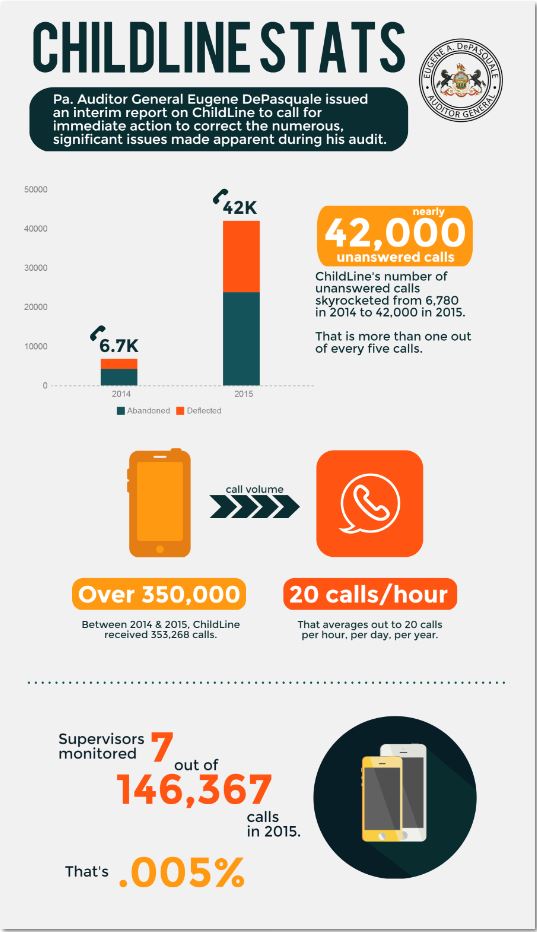