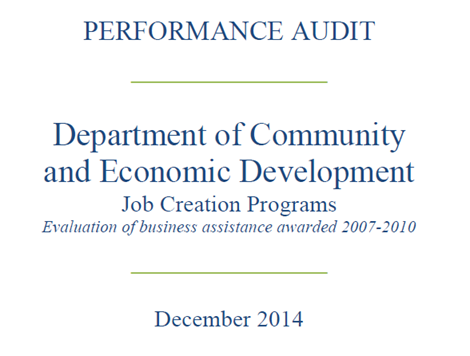 HARRISBURG (Dec. 10, 2014) – Auditor General Eugene DePasquale today said an audit of the Department of Community and Economic Development shows that additional transparency and accountability is needed for better oversight of the hundreds of millions of dollars in taxpayer-funded job creation programs.

“Job creation programs are a critical tool in fostering a competitive business environment,” DePasquale said. “However, it is essential that these programs are properly monitored to ensure that we are getting a suitable return on investment for tax dollars, and that the jobs created are family-sustaining. Unfortunately, our audit shows that DCED is not doing a very good job in these areas.

“We started this audit with the hope we could identify which job creation programs are working and which are not because I want to ensure taxpayer dollars are used efficiently and effectively,” DePasquale said. “We quickly found that DCED does not have any overall performance goals for its individual job creation programs making it nearly impossible to verify a program’s success and effectiveness.”

The audit focused on the extent to which businesses that received job creation assistance actually created and retained the jobs they promised. Auditors also looked at actions DCED takes when businesses do not fulfill their contractual commitments and how DCED reports the results of its job creation programs to the General Assembly and the public.

Auditors reviewed DCED records for 600 businesses that received $212.9 million in grants and loans from 2007 through 2010 and were monitored for contract compliance by DCED from July 1, 2010, through June 30, 2013, with updates through June 30, 2014. Five job creation programs were included in the review:

Auditors found that only 56 percent of the businesses awarded assistance actually created and/or retained all of the jobs promised in exchange for the financial assistance provided by the commonwealth.

“That means that nearly half of the businesses we reviewed failed to create or retain the jobs as promised,” DePasquale said. “I urge DCED to strive to do better, especially in the area of establishing performance goals for these job creation programs. DCED must have solid goals in place to measure the effectiveness of loans and grants so they can make informed decisions on future deals.”

DePasquale also noted that DCED did not comply with its statutorily mandated reporting requirements. A review of DCED’s Annual Financing Strategy Report revealed three of the seven key items required by law were missing from this document and two others that DCED produced to report on job creation programs. In the reports, DCED inflated job numbers by counting “projected” job creation and retention numbers as “actual” numbers. Additionally, auditors found that DCED overstated those projections by including numbers for projects that do not even have a job requirement.

“After reviewing the three different reports on job program performance, we concluded that DCED did not provide the accountability and transparency that the General Assembly requires by law, and more importantly, that taxpayers deserve,” DePasquale said.

The audit report notes that DCED made improvements regarding its monitoring of businesses since the last audit in 2007, as well as in its assessment and collection of penalties on businesses that failed to create or retain promised jobs.  However, auditors found that additional improvements are needed.

During the audit period DCED imposed an interest rate increase on 46 businesses that received a loan, but failed to create or retain all the jobs pledged. Additionally, DCED assessed $10.9 million in penalties against 72 businesses awarded grants, and as of June 2014 the agency collected $4.5 million of those penalties.

The recommendations made to DCED include:

• establish performance measures or goals for each of the job creation programs and include such measures in the department’s Annual Financing Strategy Report;

• continue to hold businesses accountable for creating and/or retaining the number of jobs pledged by continuing to impose penalties to recoup the taxpayer investment when a business fails to comply with their contractual obligations;

• monitor and verify job creation data for all businesses awarded loans, including those businesses that pay off the loan prior to the final monitoring date; and

• ensure that the Annual Financing Strategy Report includes all information required by law, including performance measures, accountability factors and a narrative of each economic development program that includes job creation and retention statistics for each loan, grant or credit awarded.

Just as job creation programs can help foster a better business environment and provide a valuable incentive to attract business development, so too can be the transfer of public land to private entities for economic development purposes. While land transfers were outside the scope of this audit, the auditor general made the recommendation that the legislature and the Department of General Services re-evaluate the criteria and stipulations included in transfers of formerly public land to strengthen transparency measures that ensure the land is used as intended and to protect the interests of taxpayers.

A copy of the DCED audit report is available online here.

EDITOR’S NOTE:   Attached is a list of regional examples of businesses that recently received job creation grants from DCED.

Here are regional examples of several businesses that recently received job creation grants from DCED. These grants were awarded after the audit period and therefore not included in the audit report on DCED’s job creation programs.