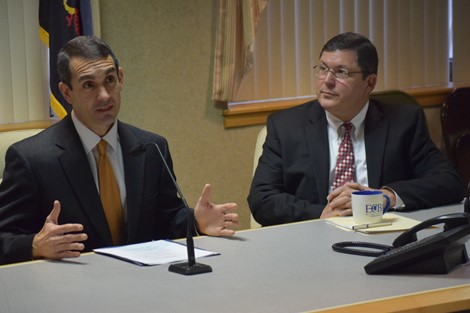 ERIE (Dec. 17, 2015) – Auditor General Eugene DePasquale today said a recent performance audit of the School District of the City of Erie shows the district continues to face serious financial challenges that are exacerbated by the lack of a fair state funding formula and dramatic increases in tuition payments to charter schools.

“I am encouraged that the district recognizes the serious nature of its financial situation and is in the process of making improvements in its accounting and overall management,” he said.  “However, the district alone cannot pull itself out of this financial quagmire.  It needs action from our governor and the General Assembly in Harrisburg to come up with a fair state basic education funding formula and to reinstate the charter school tuition reimbursement."

The district tried some short-term fixes, including a costly sale/leaseback agreement in 2012 with the Erie County General Authority for four school district buildings no longer in use.

“While this sale/leaseback agreement provided the district with a needed one-time cash infusion of $10.2 million, it will end up costing the district over $6 million when it pays all of its principal, interest, and fees over the 20-year period,” DePasquale said. “While we understand that this was a desperate move on the district’s part to stay afloat financially, the reality is it just kicked the can down the road and increases the district’s overall costs.”

“When the commonwealth eliminated the partial charter school tuition reimbursement in 2011, it made financial matters even more strained for Erie’s school district and hundreds of other districts throughout the commonwealth,” DePasquale said.  “Reinstating this reimbursement would not solve the district’s financial problems entirely, but it certainly would relieve some of the stress.”

DePasquale said that not all of the district’s financial woes were beyond its control, noting that in particular, auditors found the monthly treasurer’s reports were provided to the school board three to four months late, 39 percent of the time, between May 2010 and December 2014.

“It is absolutely essential that school board members have timely information to allow them to make informed financial decisions,” DePasquale.

To help the district deal with its financial issues, auditors recommend that district officials develop a short-term (one-to-three years) operating plan to identify and address the structural elements that are leading to annual operating deficits. The district is also encouraged to establish procedures to make appropriate periodic journal entries, as well as year-end adjustments, in order to properly and timely account for all transactions and provide the school board with complete, accurate financial information.

In a finding on annuitants, auditors also noted between 2008 and 2013, the district compensated 46 rehired retirees.  Many returned to district work for three or more consecutive years, which could be a violation of the Pennsylvania School Employees’ Retirement Code and its related guidelines. The audit results are being forwarded to the Pennsylvania Public School Employees’ Retirement System (PSERS) for review.

“Some of the annuitants did not have the Pennsylvania Public School Employees’ Retirement System required 90-day break in service,” DePasquale said. “In some cases, it was retire on a Friday and be back to work on Monday in the same job, which is a clear violation of PSERS rules.”

• Paid for more than 100 cell phones issued to employees, school board members, a consultant, a solicitor, and two retired employees – without policies and procedures in place for approved use —  resulting in a district cost of $370,000 total from 2011-12 through 2014-15; and

• Had significant errors in the district’s transportation data reporting to the Department of Education for nonpublic and charter school students that resulted in a potential underpayment of $272,965.

The audit report for the School District of the City of Erie is available online at www.PaAuditor.gov.