HARRISBURG (July 13, 2017) – Auditor General Eugene DePasquale today said audits of the three agencies that are at the forefront of Pennsylvania’s opioid crisis response show that progress is being made, but measuring effectiveness is complicated because each agency has a different definition of effectiveness.

“From 2013 to 2015, Pennsylvania rose from ninth to sixth nationally in the number of opioid overdose deaths,” DePasquale said. “We have more than an opioid crisis in Pennsylvania; we have a disease epidemic that is ripping apart the lives, finances and families of people in every community. This epidemic will not go away overnight, so we must plan, direct and coordinate our efforts to maximize the state’s resources to help people.”

DePasquale noted that societal perspectives about how to deal with opioid addiction must change, too.

“We need to approach the opioid crisis with science as a medical problem,” he said. “When we do that, we will be able to create a brighter future for thousands of people and be better prepared for any future crisis.”

The audits covered three state agencies with roles in combatting the opioid epidemic: the Department of Drug and Alcohol Programs (DDAP), the Department of Human Services (DHS), and the Department of Corrections (DOC). The audit objective was the same for each agency: to determine the extent to which the departments are monitoring and measuring the effectiveness of opioid-related drug treatment initiatives.

The audits covered January 2013 through April 2017, and the 94-page audit report contains six findings and 21 recommendations for improvement.

Auditors found that the Department of Drug and Alcohol Programs focuses its efforts on monitoring drug-treatment providers for compliance with regulatory standards, rather than developing tools to coordinate multi-agency efforts and accurately measure effectiveness of treatment efforts.

“While licensing and monitoring programs are useful as a quality control measure, DDAP has been restrained from living up to the purpose for which it was created,” DePasquale said.

“For example, there is currently no easy access to the information from DDAP to enable consumers to make educated choices about drug-treatment providers,” DePasquale said. “DDAP posts limited information from its inspection results on its website, but the department does not rank cited deficiencies by severity, making the information difficult to understand.”

Auditors noted that underfunding and understaffing of DDAP since the General Assembly created it in 2012 has prevented the agency from being able to expand to better address the opioid crisis.

“The law creating DDAP did not specify that the department could collect licensing fees,” DePasquale said. “As a result, the department is missing the opportunity of a potential revenue source to help fund its operations.

“Although much of its funding is from federal, not state, dollars, a licensing fee would greatly aid the department in its efforts to combat the opioid epidemic and prepare for the next drug crisis.”

Another missed opportunity of a potential revenue source DePasquale highlighted is the levying of fines for licensing regulation violations. Fines would provide a disincentive for providers to establish practices that put people at risk and give DDAP another tool to encourage faster regulatory compliance.

“The Department of Drug and Alcohol Programs must use every tool at its disposal,” DePasquale said. “If the department levied fines for regulatory violations, not only would much needed revenue be generated for the department, but treatment providers would also be much more conscious of compliance and quality control.”

DDAP agreed with the findings and indicated it will work with the governor and the General Assembly to implement the audit recommendations.

In 2016, the commonwealth established 45 Opioid Use Disorder Centers of Excellence with 51 locations statewide. Centers of Excellence are intended to coordinate and integrate behavioral and physical health services to assist Medicaid-eligible Pennsylvania citizens addicted to opioids with obtaining treatment and staying in recovery.

“I commend the General Assembly and the Wolf Administration for establishing the Centers of Excellence,” DePasquale said. “Although the initiative is still in the initial development phase, I believe the Centers of Excellence will help to ensure that individuals do not fall between the cracks and miss the opportunity to get the medical and behavioral health care they need.”

DePasquale noted, however, that while DHS has established initial measures for evaluating the effectives of the Centers of Excellence, DHS does not have procedures to ensure the accuracy and completeness of the data collected.

“Adding a step to verify the accuracy and completeness of the data is crucial,” DePasquale said. “Since funding for each Center of Excellence is dependent on its performance, the Department of Human Services must confirm that the information used for evaluation is accurate and complete so that any conclusions drawn about Center of Excellence effectiveness is not flawed or misleading.”

DHS agreed with the findings and reiterated the agency’s commitment to ensuring the accuracy and completeness of the data submitted by the Centers of Excellence.

Sixty-four percent of the individuals entering the correctional system are identified as having substance use disorders. DOC operates seven types of in-house programs to help individuals with addiction learn to live without the substances.

However, auditors found that only one of the treatment programs is routinely monitored for effectiveness and that monitoring is limited to effectiveness at reducing recidivism, not reducing substance abuse.

Additionally, auditors noted that the DOC discontinued a study on its medication-assisted treatment program, where Vivitrol® is administered to block cravings and the ability to get high from opioids.  “With the high expense of this program, it is critical that DOC restart the evaluation of the program for effectiveness,” DePasquale noted.

“Reducing recidivism is extremely important, but the Department of Corrections must also monitor the overall effectiveness of its drug-treatment initiatives,” DePasquale said. “Not returning to prison is important, but so too is not relapsing into drug abuse and addiction.”

DePasquale recommends that DOC develop regular periodic evaluations of all its treatment programs and work with other partner agencies, including the Pennsylvania Board of Probation and Parole, to access data that could be used to further evaluate effectiveness.

DOC officials agreed with the findings and indicated the agency will share the results of its evaluations with its program treatment staff so that programs can be tailored to reducing the opioid epidemic.

“Because of these audits, DHS already is working to develop plans to verify the accuracy and completeness of data it is collecting from the Centers of Excellence,” DePasquale said. “That is a small step forward, but it is a step in the right direction.

“No one is immune to this epidemic, and it has already caused merciless pain and sorrow to many Pennsylvania citizens and families,” DePasquale said, noting that the federal Drug Enforcement Administration released updated statistics last month that showed across Pennsylvania, drug overdose deaths rose by 37 percent last year to 4,642 — nearly four times the number of fatal traffic accidents.

“There are no easy answers in combatting this epidemic, so it is important to make sure that every tax dollar spent to prevent abuse and treat people is spent wisely and effectively.

“The recommendations in this report should encourage agencies to work together to improve the delivery of drug-treatment services,” he said.

“The price of inaction is just too high. Too many people and their families are suffering from this opioid scourge. We have a responsibility to do all we can to end this public health epidemic and put effective systems in place so we are prepared for the next crisis.”

The Opioid Treatment Audits report is available online at: www.PaAuditor.gov.

Anyone who needs assistance in finding a treatment provider or funding for addiction treatment can call 1-800-662-HELP (4357) or go online to www.pa.gov and select “opioid addiction.” 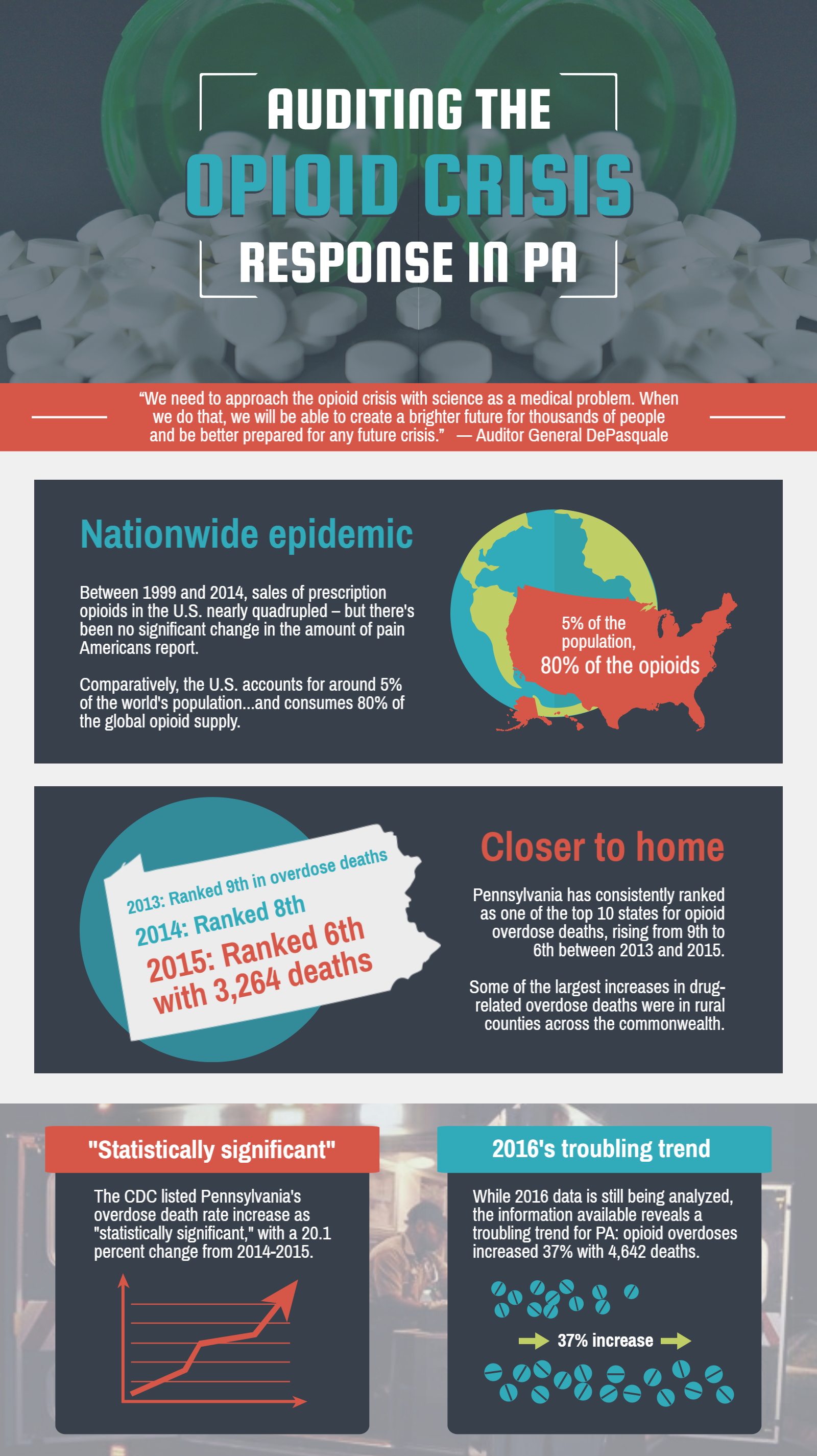 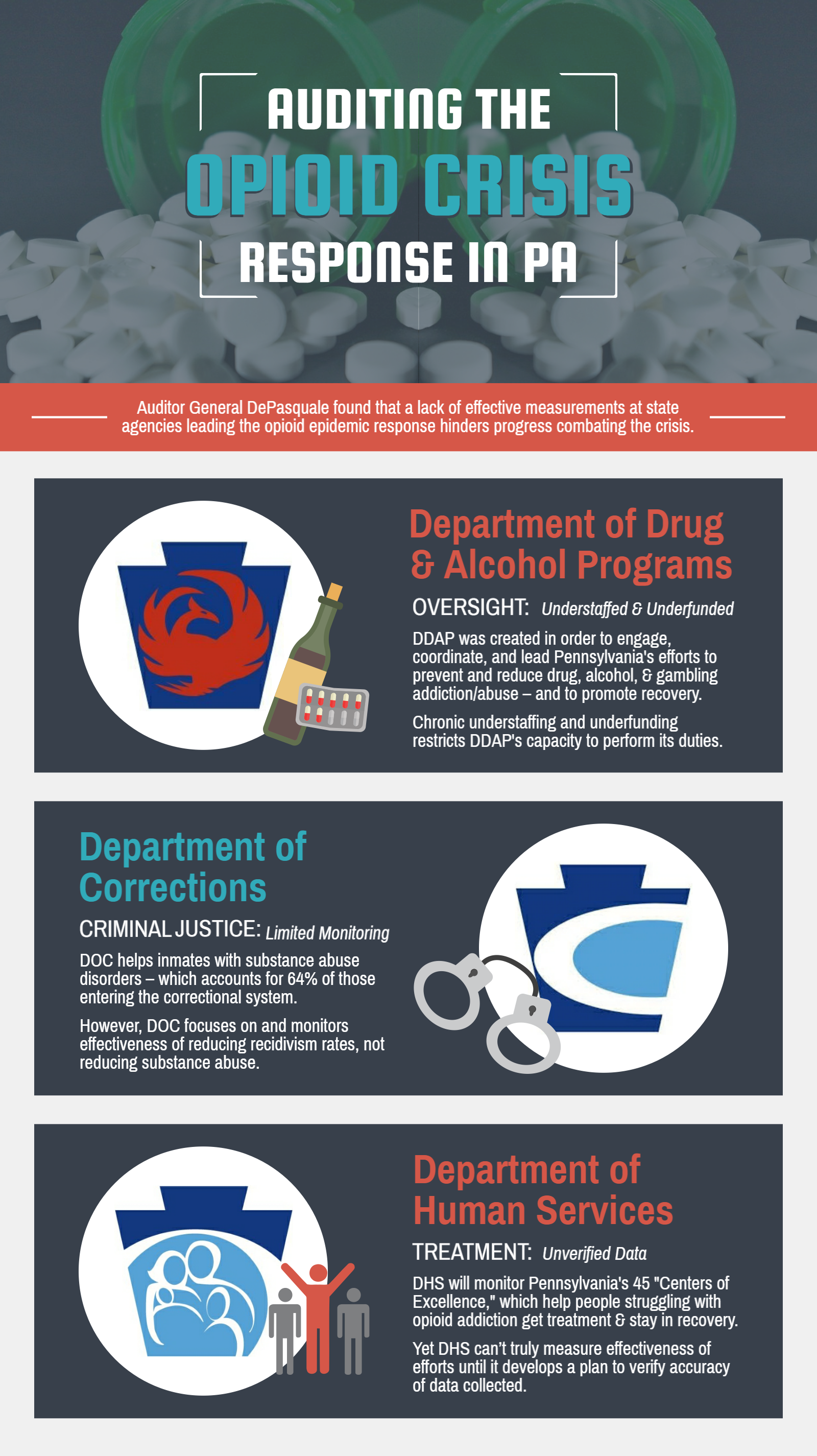