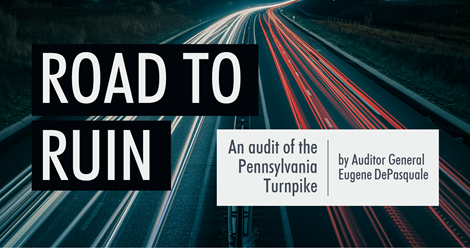 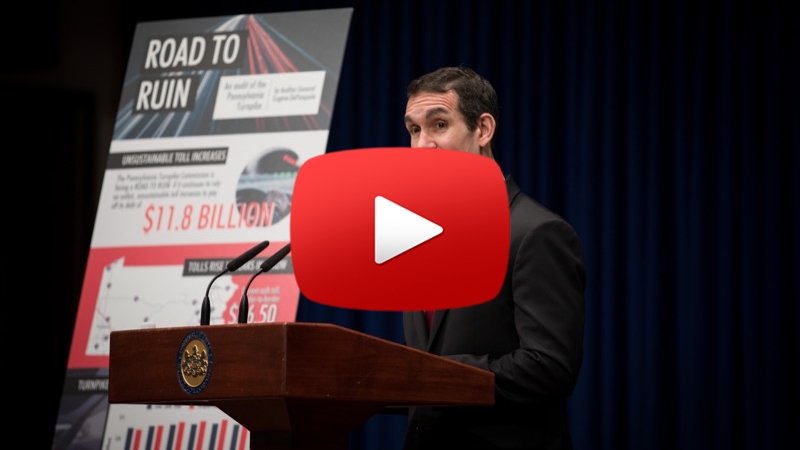 HARRISBURG (March 21, 2019) – Auditor General Eugene DePasquale today said his latest audit shows the Pennsylvania Turnpike Commission (PTC) is facing “a road to ruin” if it continues to rely on unfair and unsustainable toll increases to pay off $11.8 billion in debt.

“It is clear now that the projections in my 2016 audit regarding the turnpike’s financial situation are coming true,” DePasquale said. “The Turnpike Commission, once viewed by some as a cash cow, has been milked to the brink of collapse.”

Toll rates are expected to triple in under 30 years, which may lead more drivers to avoid the highway and use winding and steep alternate routes instead. DePasquale said stagnant traffic growth and a reduction in projected traffic may indicate this is already occurring.

A 2007 state law required the Turnpike to make substantial payments to PennDOT to fund other types of transportation projects and services. Since those payments began in 2008, Turnpike tolls have risen above the rate of inflation every year and the commission has taken on a significant amount of debt to keep up with its obligations to PennDOT.

“The Turnpike simply cannot continue to raise tolls to cover the legally mandated payments to PennDOT,” DePasquale added. “Hiking tolls year after year while hoping that E-ZPass users won’t notice is not a sustainable revenue plan and it causes a financial hardship for motorists.”

The audit notes that the Turnpike Commission will be at risk of defaulting on its debt payments if traffic and revenue projections are not met and steps are not taken to reduce the amount of money it must provide to PennDOT.

“Further complicating matters is a lawsuit filed by groups representing truckers alleging the state is violating federal law by making Turnpike customers pay for non-turnpike projects and services,” DePasquale said. “The lawsuit has already prompted the Turnpike to stop borrowing money and defer making several payments to PennDOT this year.”

Uncertainty over that case, DePasquale said, is having a ripple effect across the state. Numerous PennDOT projects have been placed on hold and public transit providers are concerned they may have to cut service for riders if there is a dramatic reduction in state support. PennDOT Secretary Leslie Richards has said the case could have a “catastrophic” impact should the state lose in court.

“The General Assembly’s attempt at enacting a quick fix has pushed us down the slippery slope of unintended consequences,” DePasquale added. “It’s been 12 years and the state still hasn’t come up with a way to adequately fund transportation needs.”

A significant finding in the 2016 audit addressed drivers who avoided paying tolls. Since then, a new state law was enacted that allowed for the suspension of vehicle registration for unpaid tolls and fees. During an amnesty period offered in 2017, the Turnpike collected more than $1.4 million in violations due. However, nearly 40 percent of what is still owed is due from out-of-state motorists.

“I applaud the commission for working to implement my audit recommendations and to set up reciprocal agreements with other states to help collect the money it is owed,” DePasquale said, noting that such an agreement is now in place with the state of Delaware.

A major finding of the 2011 audit involved a PTC policy, still in place, that allows Turnpike employees free use of the toll road system for business and personal use. Over a three-year period ending in May 2018, employees racked up more than $2.4 million in free travel.

“While I’m still not in favor of the employees-ride-free policy, at least the commission has begun to monitor employee travel to look for potential misuse – just as I recommended,” DePasquale said. “As a result of the monitoring, the commission recovered $10,125 during the latest audit period.”

Another 2011 finding involved toll-free travel provided to contractors, consultants and state officials. DePasquale said the value of that free travel totaled more than $5.9 million over a three-year period ending in May 2018.

“Again, I’m urging the commission to keep monitoring to make sure that any free travel is restricted to official business purposes,” DePasquale added.

The Auditor General suggested the Turnpike review the size of its car fleet to identify potential cost savings, noting that eliminating his own department’s fleet of vehicles now saves taxpayers more than $877,000 per year.

The audit also gave the Turnpike credit for following its policies and procedures in awarding construction contracts and engineering consultant agreements.

Review the latest Pennsylvania Turnpike Commission audit and learn more about the Department of the Auditor General online at www.paauditor.gov.