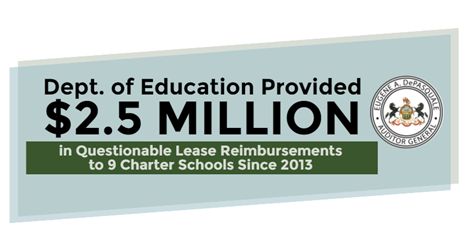 HARRISBURG (Aug. 3, 2016) – Auditor General Eugene DePasquale today said an audit of the Propel Charter School System in Allegheny County is another example of the Pennsylvania Department of Education (PDE) diverting millions of dollars from classrooms to the bank accounts of some charter school operators.

The audit of the Propel Charter School System, which covered December 2010 to April 2016, questioned the $376,921 lease reimbursement provided by PDE because of potential conflicts of interest and related-party transactions between the landlord and the charter school.

“The Pennsylvania Department of Education’s own guidelines for the lease reimbursement are clear that buildings owned by the charter school are not eligible,” DePasquale said. “The problem is that PDE makes no effort to verify ownership of the buildings or look for conflicts of interest between the school and related parties. They simply write a check for whatever amount the charter school submits. That is a disservice to Pennsylvania students and taxpayers.

“Given that PDE has the authority to approve the lease reimbursements, they also have the authority to claw-back the funds if there is any indication that the charter school actually owns the buildings through related parties,” he said. 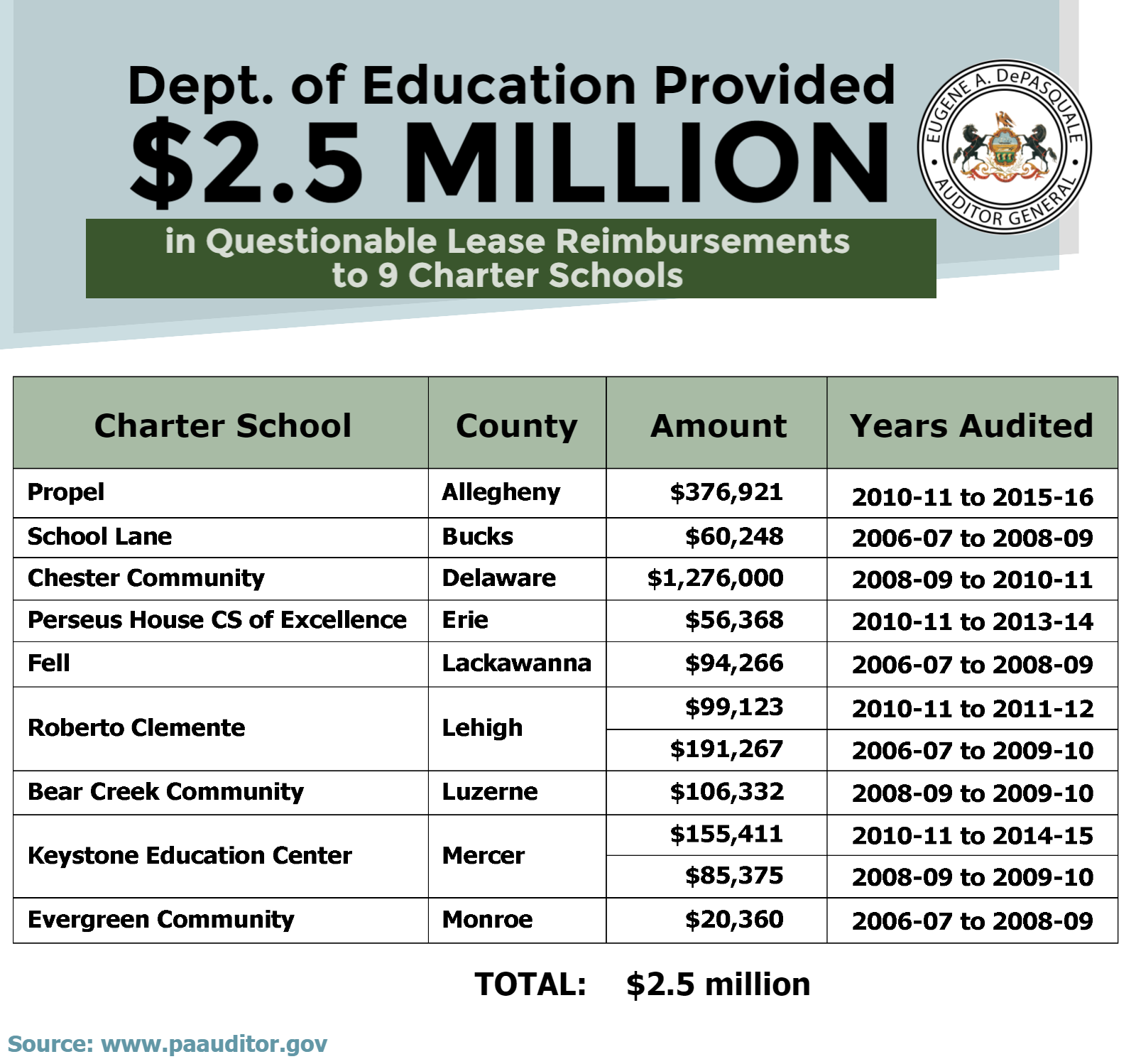 “If PDE takes the time to review the audits we send them, they would realize my team has done the hard work for them,” he said, noting that the U.S. Department of Education, as recently as September 2015, advised states to carefully review “charter school governing boards for conflicts of interest, related party transactions, and appropriate segregation of duties.”

“Since March 2013, I have questioned PDE’s payment of millions of dollars of education funding being diverted to reimburse some charter schools for lease payments.”

“Schools in this state are struggling, and $2.5 million is a lot of money that could be better spent on classroom education,” DePasquale said, noting the money could help pay for adding more than 40 teachers to classrooms.

“The fact that we let even one cent of that money go to waste is a travesty – and it is indicative of a much larger problem. We have the worst charter school law in the country, and we need to do a complete overhaul, not piecemeal adjustments.”

“Unlike PDE, my team refuses to blindly accept what the charter school tells them,” he said. “We research and comb through the legal documents related to a lease to identify conflicts of interest and related parties.

“In the Propel audit, we found that the bond document filed by the landlord with the Allegheny County Industrial Development Authority identifies the charter school’s founder and executive director as the contact person for the landlord, who, by the way, was the borrower on the financial documents.”

In most of the charter school audits with a questionable lease reimbursement finding, the schools defend the reimbursements by saying that PDE approved the request.

“Despite routinely making recommendations to PDE in our audit lease reimbursement findings, PDE has not taken any actions in response to our findings to claw-back the funds.”

“Not all charter schools abuse the lease reimbursement opportunity and PDE’s rubber-stamp approval policy,” DePasquale said, pointing to four charter schools that lease facilities but where there were no conflicts of interest or related-party transactions.

For example, the audit of the Robert Benjamin Wiley Community Charter School, in Erie last December, found that the school missed $93,600 in lease reimbursement payments because it missed two filing deadlines with PDE for the 2011-12 and 2012-13 school years.

“In the Benjamin Wiley Charter School audit, we found no potential conflicts of interest or related-party transactions that would make us question the school’s request for lease reimbursement,” he said, noting that after the audit, the school reported that it filed a lease reimbursement on time for 2013-14 and received $50,790.

“I want to make sure every available dollar of education money is benefiting students and enhancing learning opportunities,” DePasquale said.