Calls for stakeholders to convene to ensure all 3,000+ kits can be tested, help victims find peace 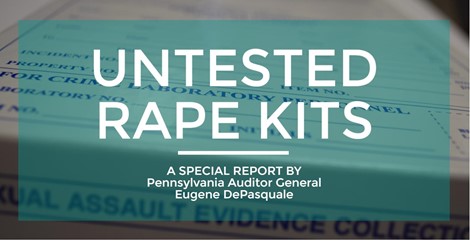 Calls for stakeholders to convene to ensure all 3,000+ kits can be tested, help victims find peace

HARRISBURG (Sept. 7, 2016) – Auditor General Eugene DePasquale today announced that an eight-month review of the state’s backlogged rape kits has shown inadequate communication to local law enforcement agencies, errors in the Department of Health’s (DOH) report of kits and resource shortages that could lead to delayed justice for rape victims.

“The psychological and physical trauma of rape are profound for victims and their loved ones,” DePasquale said. “Part of the healing process includes bringing rapists to justice. Delayed processing of rape kits prevents swift justice.

“The thousands of sexual victims in Pennsylvania who have been awaiting justice deserve better, and as a commonwealth we must do better.”

The 67-page special report features three observations and 10 recommendations, including one calling for stakeholders to convene immediately to address resource shortages and insufficient communication that is preventing the Sexual Assault Testing and Evidence Collection Act (Act 27 of 2015) from being fully carried out.

“Act 27 may have been a good starting point for officials to get a handle on how many untested rape kits exist in the commonwealth,” DePasquale said. “However, implementation of the law stumbled right out of the gate.”

One of the report’s observations is that, despite communication efforts by multiple agencies, local law enforcement officials remain largely misinformed or uninformed about Act 27’s reporting requirements. Because of this lack of knowledge, the Department of Health’s mandated April report, which listed 3,044 total untested rape kits and 1,852 backlogged (untested for 12 months or more) kits, was flawed.

Some of the communication — particularly the letters sent by DOH — was confusing and poorly written.

“This poor communication contributed to a low participation rate by law enforcement agencies, which in turn caused an undercounting of the kits awaiting testing,” DePasquale said. “Nevertheless, both DOH and police must act swiftly to resolve the backlog of untested rape kits — some of which date to the 1990s. Failing to act expeditiously on this adds yet another insult to victims of rape.”

Also problematic is that some agencies did not have their tallies properly included in the report. For example, Pennsylvania State Police (PSP) provided proof that it reported 58 kits for the initial inventory (the number of overall kits), but the DOH report does not include that number. Instead, it lists a dash, meaning no information was reported.

“Without an accurate count, how are labs supposed to know how many kits will be coming in to be tested?” DePasquale said. “An accurate count is the foundation on which every other part of the process to test these kits rests.”

DePasquale noted that another, systemic problem likely contributed to the poor communication and undercounting: a lack of resources, especially at DOH. 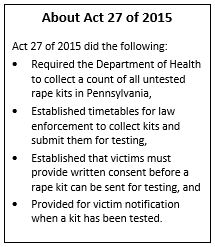 When the General Assembly passed the legislation that became Act 27, it failed to provide any resources to either DOH or the state crime labs to test these kits.

“Because no additional resources were allotted to anyone — not local law enforcement agencies, not PSP, not DOH — employees who were already busy had to find time to handle their newly appointed Act 27 duties,” DePasquale said. “At DOH, that meant a handful of current employees were assigned tasks such as coordinating with other stakeholders, creating letters to educate law enforcement agencies about their Act 27 reporting responsibilities and answering questions by phone or email.”

Local law enforcement agencies, which themselves are often short-handed, then had to sort through the information they received and try to figure out what was required of them to comply with Act 27 — if they did anything at all.

“The next stage in the process is sending the kits to state crime labs,” DePasquale said. “Our review revealed that each of the labs is already overwhelmed and has significant backlogs on all kinds of cases, not just sexual assault kits.”

The three major public crime labs — Philadelphia Office of Forensic Science, PSP and the Allegheny County Office of the Medical Examiner — all reported turnaround times of at least six months for rape kits. In Allegheny County, there is a two-and-a-half-year backlog on all kinds of cases.

“These crime labs simply do not have enough people, equipment or funding,” DePasquale said. “In Allegheny County, there are nine people to process evidence from 137 law enforcement agencies, including Pittsburgh. Know how many people that lab had before the advent of DNA testing? The same number — nine.

“With the advent of DNA testing, the amount of work on most cases doubled and the number of cases coming in increased fivefold, and they still have the same number of people. It’s ridiculous,” DePasquale said. “This is highly technical work that would be a great career opportunity, but there’s not enough funding available to create these jobs.”

The review also revealed that all three major public crime labs are receiving federal grants just to stay afloat — and that federal money is decreasing every year.

“One lab representative told us she lives in fear of the federal money going away,” DePasquale said. “And yet that’s what’s slowly happening. We all know money is tight at the state and local levels in Pennsylvania, but it’s time the legislature stepped up and provided enough resources for these labs to function efficiently.”

The report’s third observation is that, because of local law enforcement agencies’ lack of knowledge about new rights created by Act 27, it is likely that rape kits are being sent for testing without the newly required victim consent to test.

“The best example of this is Harrisburg City Police,” DePasquale said. “When our team contacted the department to find out why it hadn’t reported how many untested rape kits it had, they learned that the officer in charge of the evidence room wasn’t even aware of Act 27’s reporting requirement.

“Then, the officer said that the department doesn’t have any kits awaiting testing because its policy is to send all kits regardless of consent to the crime lab to be tested. Not only is that now illegal, it’s also unconscionable,” DePasquale said. “Can you imagine being a victim traumatized by rape — which is a crime of control — and then, after undergoing an hours-long forensic exam, the decision of whether to test that evidence is taken away from you? How helpless would you feel?

“But that’s what could be happening because some law enforcement agencies may not fully understand the new law. That practice needs to stop immediately.”

DePasquale called for the legislature to look for ways to provide ample resources to meet Act 27’s requirements and at revising the law to clarify ambiguous language.

“The General Assembly cannot continue to pass unfunded mandates,” DePasquale said. “The implementation of this law has been a mess, and it’s time for these problems to be fixed.

“Getting these rape kits tested is not only the right thing to do for victims, but is also a clear way to catch criminals and prevent future crimes,” DePasquale continued. “Pennsylvania needs to test every kit that has received victim consent for testing because every kit could have valuable evidence that could help apprehend sexual predators.”

DePasquale urged House and Senate Judiciary and Health committees; representatives from the state Department of Health, Pennsylvania State Police, Philadelphia Office of Forensic Science and the Allegheny County Office of the Medical Examiner; and other stakeholder groups to meet to discuss exactly what resources and funding are needed fully comply with Act 27’s requirements. He said the group should produce a report of its results to present to the General Assembly by Feb. 1, 2017.

Local law enforcement agencies and crime labs must report how many backlogged kits they have on hand as of Dec. 31, 2016, to DOH by Jan. 31, 2017. The next DOH report on backlogged kits is to be released in April 2017.

EDITOR’S NOTE: Cpl. Adam Reed, coordinator of the Pennsylvania State Police Public Information Office, will handle all PSP-related media calls. He can be reached at 717-783-5556.