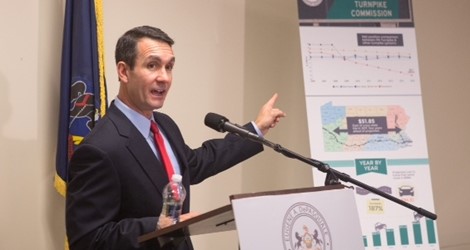 PITTSBURGH (Sept. 6, 2016) – Auditor General Eugene DePasquale today said an audit of the Pennsylvania Turnpike Commission shows that the commission is on potentially unstable financial ground that could have serious repercussions on the state’s entire transportation system if the General Assembly doesn’t act soon.

The latest performance audit of the turnpike, which covered fiscal years 2014 to 2016, found that toll violations are increasing, causing the turnpike commission to write off $12 million to $20 million per year. The audit also notes that failing to meet the commission’s unrealistic traffic and revenue projections could contribute to a financial and statewide transportation crisis in the next seven years.

“The turnpike is relying on unrealistic revenue growth projections that should be setting off alarms now and in the near future,” DePasquale said. “On a positive note, our audit found that the commission is following its procurement rules when it comes to awarding contracts and that the turnpike commission is managing its current financial situation.”

The audit found that the turnpike commission is carrying a heavy debt load and is using highly optimistic consultant projections to predict how much money will be coming in each year through 2044 — a combination that could spell disaster.

“Act 44 requires the Pennsylvania Turnpike Commission to pay $450 million per year to PennDOT through 2022,” DePasquale explained.

DePasquale first highlighted the problems with the $450 million Act 44 payments in a special report in June 2013, and the legislature took action by passing Act 89 of 2013, which decreased the payments to $50 million beginning in 2023.

“I supported the bipartisan transportation funding reform that became Act 89 because, in addition to improving the state’s infrastructure, it increased oversight of the turnpike’s financial situation,” DePasquale said. “That extra oversight and fiscal monitoring will help create the awareness needed to address the problem before we reach the next transportation funding cliff in 2023.

“In seven years, there’s going to be a $400 million gap in the amount of money PennDOT receives to support public transit agencies in cities and smaller communities across the state,” DePasquale continued. “If the General Assembly doesn’t begin to act now to come up with a plan to make up for the shortfall, the residents who rely on public transit agencies will be faced with severe service cuts — which could result in unaffordable fare hikes.”

For the turnpike commission to be able to make its Act 44 and 89 payments it must increase toll rates every year, and even that may not be enough.

“In short, this means the turnpike must continue to raise rates every year and it must increase the number of vehicles that use the roadway by historic levels,” DePasquale said. “As Vice President Joe Biden might say, that’s a bunch of malarkey. There’s no way more people are going to use the turnpike and pay more and more money to do it.”

“The turnpike commission’s consultant is operating under the belief that, ‘if you build it they will come,’ but this isn’t Kevin Costner’s field of dreams. This isn’t a Hollywood movie; at some point people will refuse to pay the toll and start looking for alternative routes.”

In fact, another part of the equation is that the turnpike has to decrease how much it’s spending on capital improvement projects — the re-building plan was already reduced by $1 billion over the next 10 years.

“This is where it gets even more unrealistic,” DePasquale said. “You can’t cut back on construction and increase traffic 44 percent, especially while jacking up the toll rates.

The audit concludes that the turnpike commission is relying on long-shot projections to remain financially sound and bond rating agencies are watching closely.

“There are only three legislative sessions left to deal with this issue before it hits, and hits hard,” DePasquale said. “These haphazard funding gimmicks are going to collapse and leave the turnpike and people who rely on public transit systems across the state in a world of hurt if the General Assembly doesn’t act soon to find a long-term, sustainable solution.

“The reduction of Act 44 payments in 2022 might be the light at the end of a dark tunnel for the turnpike commission, but it could mean dark days for people in communities of all sizes who rely on public transit agencies,” he said, noting that many public transit agencies receive about half their operating funds from the state, including:

Already, the turnpike commission is seeing an increase in the number of people refusing to pay.

Also increasing is the amount of uncollected tolls and fees owed to the turnpike. In fiscal year 2015-16 alone, drivers racked up $61.3 million in unpaid toll violations and fees, and nearly $43.2 million remained uncollected by the end of 2015.

The audit points out that other states, such as Maine and Massachusetts, have reciprocity agreements, allowing for a vehicle’s registration to be suspended in a violator’s home state if the violator has outstanding tolls or fees in another state.

“Though the turnpike commission has an extensive, multi-level process involving multiple collection agencies to try to collect unpaid tolls and fees, it lacks the authority to deter drivers from skipping out on tolls,” DePasquale said. “What the General Assembly needs to do is provide the authority to suspend a Pennsylvania vehicle’s registration until outstanding tolls and fees are paid.

“Once we establish the authority to suspend in-state registrations, then a reciprocity agreement with surrounding states should be developed,” DePasquale said.

Following up on findings in the 2013 report, auditors found that the commission continues to allow employees, third-party vendors such as contractors and consultants, and others to travel the turnpike toll free for business and personal use.

“It makes sense for some of these people to travel the turnpike without paying tolls — state troopers, for instance, and workers traveling on turnpike business,” DePasquale said. “But toll-free personal travel doesn’t make sense and needs to end.

“I am glad to see the commission at least began requiring staff to monitor non-employees’ toll-free travel since the 2013 audit,” DePasquale continued. “But the commission’s own audit team determined that the monitoring was inadequate at times.

“Toll-free travel is an issue that the commission must address immediately,” DePasquale said. “Particularly at a time when every dollar matters for the turnpike commission, the potential for abuse of the system and the cost to allow toll-free personal travel are just too high.”

Turnpike officials agreed with the three findings and eight recommendations in the current audit report. The commission’s response is included in the 73-page audit report which is available online at: www.PaAuditor.gov.