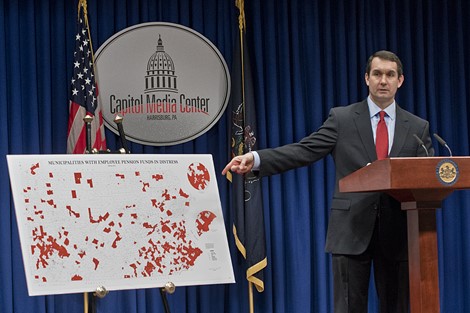 HARRISBURG (Jan. 14, 2015) – Auditor General Eugene DePasquale today said Pennsylvania’s underfunded municipal pension liability has now grown to $7.7 billion, an increase of $1 billion over a two-year period. He again called upon the governor and the General Assembly to place a top priority on finding solutions to this growing challenge facing communities across the state.

DePasquale released an updated version of his report on municipal pensions that now shows 562 municipalities out of 1,223 municipalities that administer pension plans, are distressed and underfunded, posing a huge liability to taxpayers.

The auditor general’s initial municipal pension report was based on January 2011 actuarial data from the Public Employee Retirement Commission (PERC); today’s  updated report is based upon the most recent available data reported to PERC as of January 2013.

“As I said a year ago when I initially raised the issue, our municipal pension challenges are not going away,” DePasquale said.  “It is important to note that this increase in pension liability has occurred during a growing economy.  Clearly, these pension challenges cannot be corrected by a strong stock market.  This is going to take some decisive actions by the governor and the legislature to prevent this municipal pension issue from crippling state and local taxpayers, and jeopardizing the future for our communities.”

“While the underfunded pension situation in Scranton is extreme, the city is certainly not alone,” DePasquale said. “Without action by the legislature, no relief is in sight for Scranton and the hundreds of other municipalities facing these serious financial challenges. Waiting out this situation is not an option. We cannot stand idly by and risk having any of our municipalities become the next bankrupt Detroit or Stockton, Calif.”

DePasquale’s municipal pension report includes 13 recommendations that could be considered to address the underfunding of municipal pension plans and the systemic issues associated with the administration of the plans.

• Absent a statewide plan consolidation, all municipal pension plans should consider using a low cost, conservative method of investing based on index investing. Such a practice would eliminate wild fluctuations or poor investment returns. Investment companies such as Vanguard Group (a Pennsylvania based firm), Fidelity, etc. all provide index investing at an extremely low cost to the pension plan.

Other recommendations to address systemic issues associated with the administration of municipal pension plans include:

• Consolidation of local government pension plans into a statewide system plan segregated by different classes of employees, e.g., police officers, firefighters, and non-uniformed employees, for both current and/or future municipal employees.  Such consolidation should consider the size of local government plans currently in existence and prohibit the merger of plans with unfunded liabilities with plans that are currently maintaining adequate funding levels.

• Mandate a state agency, such as DCED’s Bureau of Local Government Services, to have responsibility for providing guidance to municipalities for compliance with applicable state statutory provisions.  This agency could also establish best practices, develop manuals, and offer training to municipalities related to pension plan administration.

The report also includes the following recommendations to address the underfunding of the plans:

• Establish a new distress recovery program that would amend the current formula of state aid distribution to provide for additional state aid based on distress level.  Additional aid should only be provided if municipalities meet certain requirements such as funding plans in accordance with Act 205 standards, agreeing not to provide any benefit increases to current employees, and establishing a revised benefit structure for new hires.

• Set limits on the amount of pension costs that may be reimbursed by the commonwealth, thus ensuring that municipalities contribute a portion of a plan’s annual pension costs exclusive of state aid allocations.

• Mandate that each municipality publish its annual pension costs, by plan, for public review.