More than 675,000, mostly rural, Pennsylvanians could be at risk and the state’s billion dollar plus structural budget could be increased even more 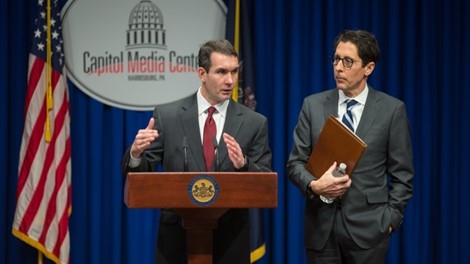 More than 675,000, mostly rural, Pennsylvanians could be at risk and state’s billion dollar plus structural budget could be increased even more

“There will be devastating consequences for hundreds of thousands of mostly rural, working poor, Pennsylvanians if Congress eliminates the Medicaid expansion provision of the Affordable Care Act,” DePasquale said during a joint news conference with Treasurer Torsella.

“We want to remind our congressional delegation that Medicaid expansion — called ‘HealthChoices’ in the keystone state — helped real people and families receive health care,” DePasquale said. “Kicking them out of the health care system now will have dire consequences on their health and ripple effects on rural hospitals that stand to lose federal funds that are helping to keep their doors open.”

CNN reported last week on the impact on eliminating Medicaid expansion in rural areas like southwestern Pennsylvania and focused on Fayette County where close to one-third of the county’s population relies on Medicaid coverage.

“As the steward of Pennsylvania’s finances, I am concerned about the impact to our residents, our economy and our budget if the Medicaid expansion is eliminated,” Torsella said. “Not only would the state lose $3 billion in direct federal health reimbursements for Pennsylvanians, but the state’s total economic activity could be reduced by $4.5 billion.  It would also add at least   $300 million to our state’s structural budget deficit.  This would make a tough situation even worse.”

“Eliminating Medicaid expansion could also hamper Pennsylvania’s fight against the ongoing opioid crisis that claimed 3,500 residents last year,” DePasquale said. “Prior to 2015, people now covered by Medicaid often sought treatment from county programs that were quickly running out of money. Now we are counting on Medicaid funding to cover treatments that will be provided by the state’s ‘Centers For Excellence.’”

The pair of Pennsylvania fiscal watchdogs noted that the benefits of Medicaid expansion are recognized by officials in both parties across the country.

In a recent op-ed in Time magazine, Ohio Governor John Kasich touted the benefits of Medicaid expansion for 700,000 people in his state, writing, “According to a recent assessment of Ohioans who gained coverage through Medicaid expansion, a majority now find it easier to find or keep a job, manage their health to avoid costly trips to the hospital down the road, and even find it easier to put food on the table.”

Similar, serious concerns are being echoed by democrat and republican governors.

DePasquale and Torsella conveyed those sentiments in a letter to Pennsylvania’s two U.S. senators and 18 congressional representatives urging them to keep the Medicaid expansion provision of the Affordable Care Act.

“We urge you to review the facts carefully before you cast a single vote that could lead to the end of Medicaid for the nearly three-quarters-of-a-million Pennsylvanians added under the ACA,” they wrote.